Edward Pleydell Bouverie, 1818 – 1889 was the Lord of the Manor of Market Lavington. Not surprisingly the name Bouverie lives on in the village. Some people always refer to The Old House as Bouverie House.  The former gatehouse for Edward’s mock Tudor mansion (Market Lavington Manor) is known as Bouverie Lodge. At the time of writing, that still remains a forlorn looking, sorry mess after a disastrous fire – but it will be rebuilt.

And that brings us to Bouverie Drive, a small estate of solid, dependable looking houses which date from around 1970.

Our photo today was taken before that estate was built and shows the area as open farmland. 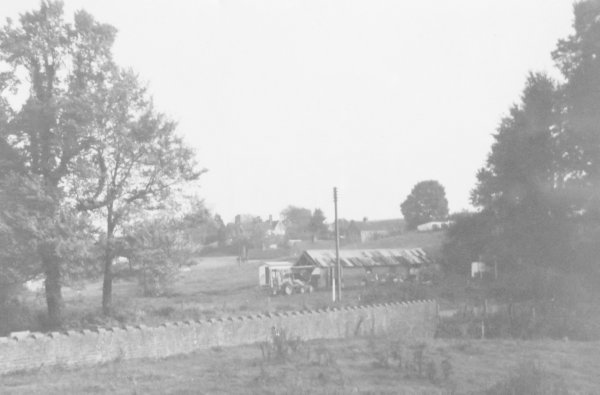 This view, taken in the 1960s shows the part of Market Lavington where Bouverie Drive was built

The person who took this photo was standing roughly where Grove Road is now. They looked across Parsonage Lane. The far side of the lane was bounded by the crenellated wall which, we understand, was a favourite play area for local lads. No doubt it was easy to imagine yourself atop a castle.

The barn in the field was known as James’s Barn. There seems to be evidence of agriculture going on around it.

The houses in the background include the former vicarage on High Street which is now part of the nursing home.