Of course, the title is not meant to suggest that politics doesn’t matter these days, although many people clearly think that our political leaders are something of an irrelevance. Maybe it was the events of 100 years ago which started the downward spiral. The First World War, some say, was an argument amongst three cousins who led different countries and that they were unconcerned about the mass slaughter. Whatever the cause was, I doubt you’d see, these days, a political gathering like this one.

This early postcard is clearly labelled Conservative Party Demonstration, Market Lavington and appears to have a date of July 2 1901.

Or is that a poorly written ‘nd’ and it just says July 2nd? We are confident it was definitely early in the 20th century.

The word ‘demonstration’ these days tends to have negative connotations. We demonstrate against things. We’d suspect that this demonstration was in support of the Conservative Party.

When it came to an election, what looks like a majority of people in the throng would not have been enfranchised. Children, of course, did not have the vote and neither, then, did women. But in these pre mass entertainment days people would go to hear a speaker and we think there was one of them. He’s not holding the attention of children who seem to have spotted the photographer, but most adults appear to be intent on something off to the right.

There are background items which are of interest. One is a motor vehicle.

A motor vehicle – perhaps a first for Market Lavington

If this really was 1901 that could have been the first car seen in the area.

No doubt the beer tent did a roaring trade.

The beer was supplied by Simonds of Reading

Simonds ales and stouts are mentioned. They were a long established brewery in Reading. Maybe they had used traction engine and huge wheeled trailer on the left of the tent. 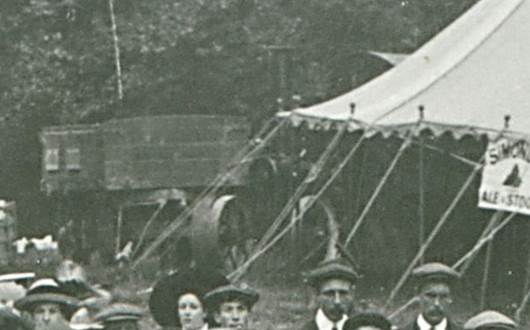 Traction engine and trailer – Market Lavington folk would have been used to such vehicles.

We can’t name any of the people. 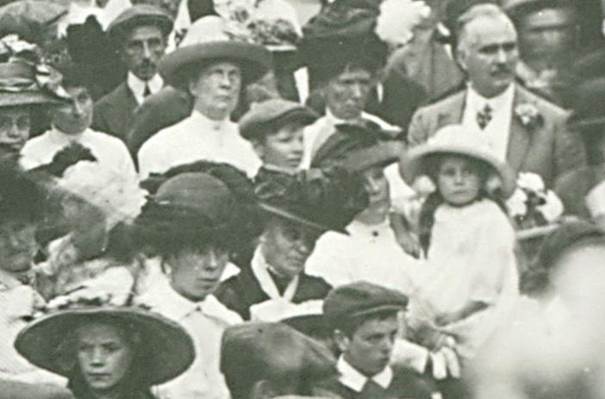 A small portion of the crowd

Back in that Edwardian era, Devizes (including Lavington) was a marginal constituency.  In 1895 Edward Goulding held the seat for the Unionists (Conservative) but he lost out in 1906 to the Liberal, Francis Rogers. The seat returned to the Unionists in 1910 when Basil Peto became the local MP.

For political neutrality, we’ll mention that other parties, representing all shades of opinion put forward candidates at elections – and, praise be, we are free to vote for whoever we like amongst those standing.