The card game whist used to be very popular in many areas and whist drives are still widely held although we don’t think they now happen on a regular basis in Market Lavington. There were two kinds of tournament. In some you went with your regular playing partner and you stuck with that person all evening. This gave a huge advantage to the regular, skilled pair. Another, very popular version was a progressive variety where partners changed for every hand. Sometimes you might get a skilled partner and at other times you had to work with a novice. This gave a slightly more random game, but even so, over an evening the best players would have totted up the highest scores.

Some financial figures we have at Market Lavington Museum indicate the popularity and scale of these events. This document shows three successive whist drives in March 1949, played for the benefit of Mr and Mrs Giddings, Mr Robbins and Mrs Hurkett. 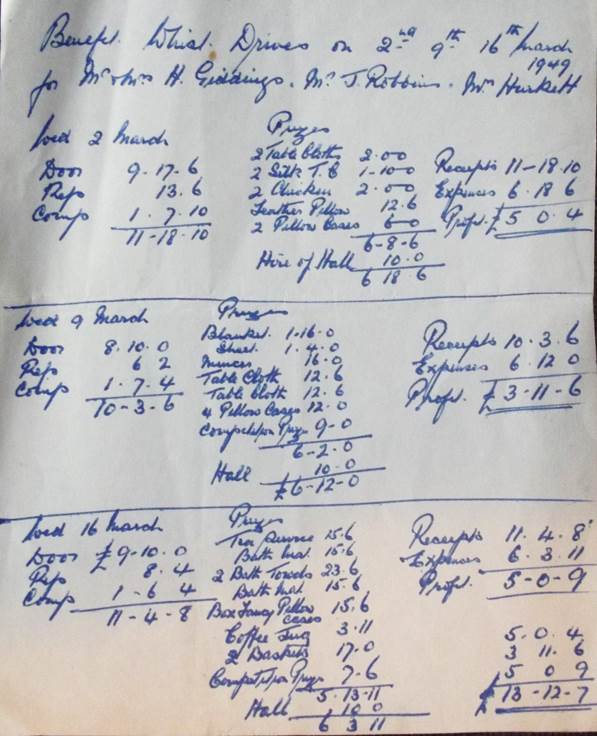 Let’s start with the costs. It cost ten shillings (50p) to hire the hall. This was the old Parish Room which stood where the entrance to the nursing home is now. And prizes were clearly purchased – and they were prizes of some value. It is interesting to see how utilitarian the prizes were. There were no chocolates or wine, which might make up the prizes these days; instead there were items like blankets, pillows, tea cloths and table cloths or a pair of baskets. Something like £6 per week was spent on prizes.

Most of the income came from entry fees. We do not know what the fee was, but from the totals we reckon it was half a crown – a lot of money in those days but, if we are right it indicates some 70 people turned up to play.

Further income came from a raffle and a competition.

We understand that all the prizes were on a table. First second and third whist players chose first and then raffle winners afterwards.

At the end of the three weeks there was a profit of £13 – 12 – 7 to share amongst the beneficiaries. In present terms that would have been worth at least £130 to each household – which must have been really lovely for them.

We cannot be certain who the beneficiaries were. There were two families of Giddings in Market Lavington and more than one Mrs Hurkett. We think the only Robbins lived in the Market Place.