This is White Street, Market Lavington. We have mentioned before that many local villages, including Easterton and West Lavington also have a White Street. These are all roads which lead up on to Salisbury Plain where the bedrock, chalk, is white in colour. Our photo – one from 120 years ago – shows the end of the street nearest the village centre. 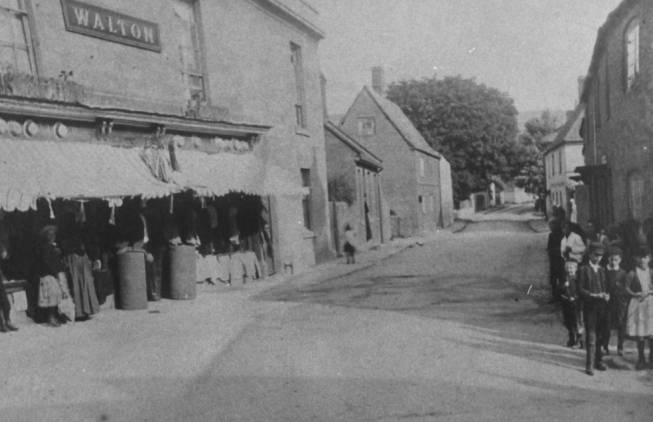 White Street, Market Lavington in about 1890

On the left we see a part of Mr Walton’s emporium. Mr Walton had, in effect, a department store. Different buildings, on both sides of the road were used to stock and sell all sorts of products. It isn’t clear what everything is on and around Mr Walton’s shop but it does look as though he has straw hats hanging above the blinds.

The single storey building beyond Walton’s was a pub – The Brewery Tap. This was run by James Neate, who lived at the Red House on High Street. He had a brewery, which was behind both his home and the pub. Later, his son Norman took it over and when he closed down pub and brewery in about 1920, commercial brewing ceased in Market Lavington.  Further down the tree we see a large tree. Is it a beech tree? It looks to be in front of Beech House.

Inevitably, in those days, if a photographer appeared, people would try to get in the shot. The shoppers under the sun shades are a bit lost in the darkness. The children on the right hand side show up well though.