Market Lavington has had a butchery business for hundreds of years. It has changed ownership, but still occupies the same premises, more or less opposite the Market Place. In the early years of the twentieth century William Eldin took over the business and our photo shows William at the door of his shop in about 1912. 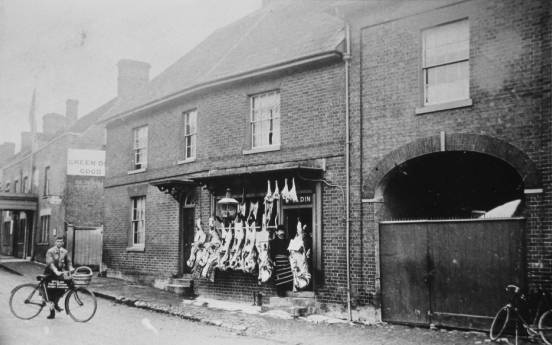 The Green Dragon, Market Lavington, Mr Eldin’s shop and the now demolished carriage arch in about 1912

There’s Mr Eldin, with a fine set of carcasses hanging outside the shop. 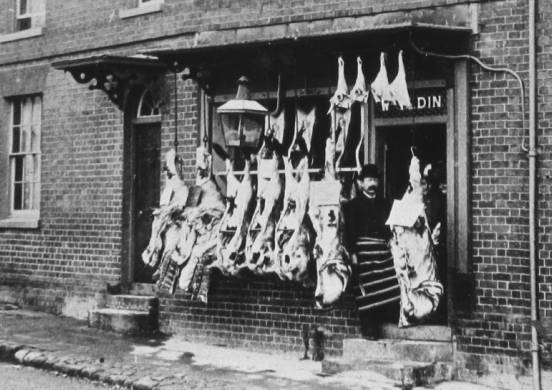 We can see that the delivery bicycle was used 100 years ago. 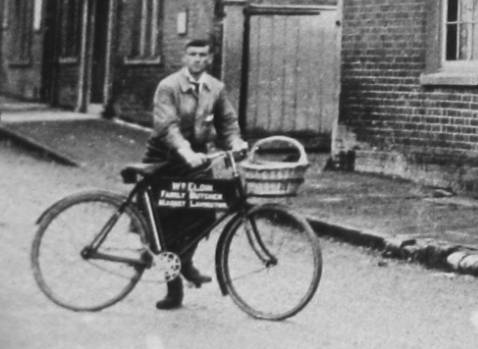 William Eldin was born about 1863 in Walmsgate, Lincolnshire. At the time of the 1871 census he lived with his parents, William, a groom and Susan at Walmsgate along with his siblings.

In 1881 William was a servant working as a groom in Dalby in Lincolnshire.

Laura Anna Howlett was born around 1862 in Fordham, Cambridgeshire. In 1871 she lived in Fordham with her father, William, who was a tailor and wool draper and her mother, Phoebe. Laura would seem to have been their youngest child.

Laura’s mother died, but Laura remained with her father until her marriage, and beyond.

William Eldin married Laura Anna Howlett in 1890. The marriage was registered in the Newmarket district during the second quarter of the year.

In 1891 William and Laura lived with her father at Fordham in Cambridgeshire. William was a butcher.

In 1901 William was a butcher living with Laura, his wife and 8-year-old daughter, Florence Anna Eldin and also Laura’s father, William Howlett, a retired tailor. 37-year-old William was said to have been born at Walmsgate in Lincolnshire. Laura, aged 39 was from Fordham in Cambridgeshire. So, too, was Florence Anna and it was at Fordham that the family lived.

Between 1901 and the next census in 1911, William and family moved to Market Lavington, taking over the long established butchery business opposite the Market Place. 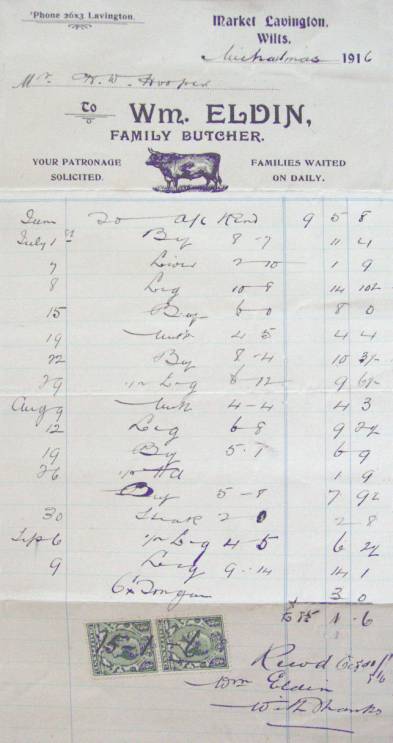 A receipt from Mr Eldin in 1916. It must have been tough for business people, having to give three months credit.

We know that by 1925, Mr Doubleday had taken over the business. The Eldins had moved to Church Street in Market Lavington (1926 electoral roll) but later were on High Street again (1939 electoral roll).

We have seen, before (click here) that daughter Florence married George O’Reilly in 1945.

Any further information about the Eldins would be very welcome.