William Frank Perry was born in Enford, further to the east in Wiltshire, in about 1878. His father, Frank, was a farm worker and William was to follow in his father’s footsteps.

As a lad, young Perry appeared to be known as Frank – he is listed as such on both 1881 and 1891 censuses when he lived in Enford, with his parents.

By 1901, William was living in Eastcott, which was then a part of Urchfont but is now a part of Easterton. William was lodging with Hannah Sloper and already he had the job of shepherd, which was to earn him his nickname of Shep.

William married Emily Ellen McKinnon in 1906. In 1911 the Perry family lived at Blacklands in Eastcott. They already had two sons by then – William Frank Perry (junior) and  Frederick George.

Our photo shows Shep, later in life in about 1930. By this time he was a shepherd for Mr Davis of Knapp Farm on White Street in Market Lavington. 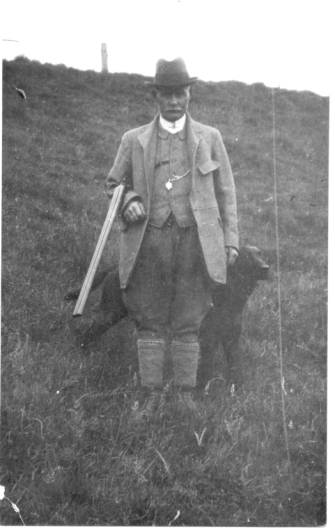 Clearly Shep was involved on a shoot on this occasion and he looks suitably dressed for the part. If anybody has any stories of Shepherds or shepherding in the village, we’d love to hear from them.