One Saunders family, that of Amram Saunders, was well known in 19th century Market Lavington for their radical views and a commitment to helping people. If William Saunders, who we look at today, was related to them it was not a close relationship.

Our photo of William is in very poor condition as you can see below. 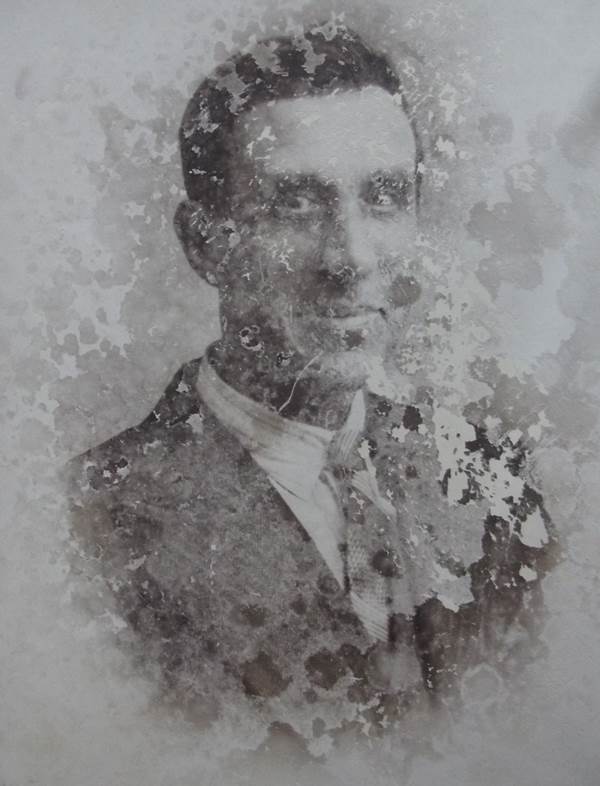 Despite the poor condition, we can see a fine, upstanding young gentleman. Let’s look into his history.

In about 1883 our William gained a sister and in 1891 the family lived on New Street (AKA The Muddle) in Market Lavington. Young William was a labourer.

By 1901 the family lived on Church Street in Market Lavington. The Williams, father and son were both working as gardeners.

In 1905 William Henry Saunders married a widow – Elizabeth Pymont. In 1911 the couple, along with Elizabeth’s daughter from her first marriage and the couple’s own daughter were living on Church Street. William was a labourer on county roads – doing road repairs. That’s the job he’s remembered for in Market Lavington. Elizabeth had been born Elizabeth Kyte in Easterton.

William died in 1952 and is buried in the churchyard at Market Lavington.

Going back in history we know that William was a direct descendant of David Saunders, the pious shepherd of Salisbury Plain.

The photo was found in a cottage in Erlestoke where the Saunders’ daughter had lived and was given to the museum in 1998.