It is no wonder we feature the agricultural engineers quite frequently. For many years Wordley’s and their successors were big local employers and very much vital to the local economy.

Today we look at an advert that appeared in a local paper. 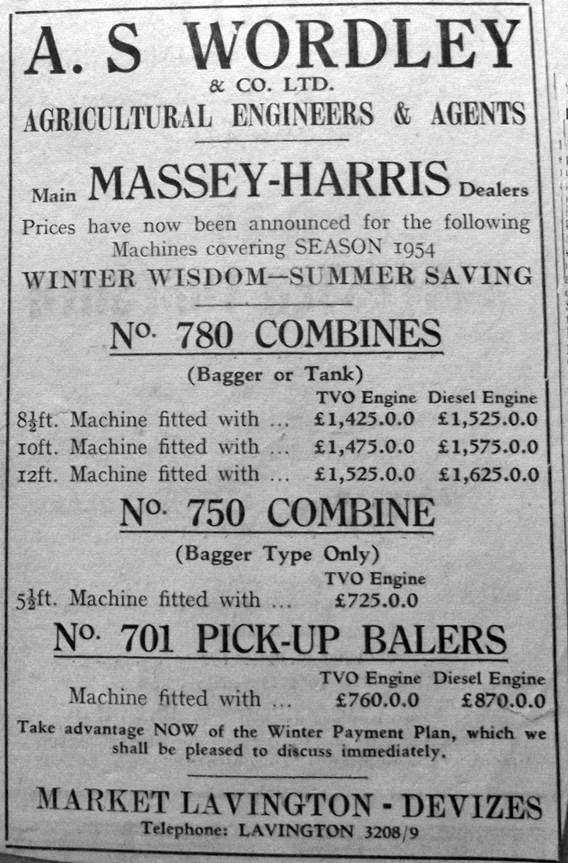 Wordley’s of Market Lavington advertise in 1953

This advert appeared in the Wiltshire gazette for 12th November 1953. Prices and equipment are, of course interesting. Wordley’s hoped farmers would buy new equipment for the 1954 season during the winter months.

The combines are, of course, tiny by the standards of today. But then the advert was placed more than 60 years ago. A five and a half feet combine is just tiny. Even the largest, 12 feet machine offered is singularly small.

And these machines were offered with TVO or diesel engines. TVO stood for tractor vaporising oil. It was based on paraffin which was untaxed. Petrol incurred fuel duty. But TVO had disadvantages, notably the engine had to be hot before the oil would vaporise. So TVO engines had to be started on expensive petrol and then swapped to the much cheaper fuel. TVO worked well for hard tasks, like ploughing, but light work could mean the need to switch to the petrol tank if the engine wasn’t hot enough.

Diesel engines, using compression ignition were more expensive to manufacture so the TVO versions were cheaper to buy.

TVO was discontinued in 1974. Old tractor enthusiasts have to mix their own these days.

If you got a bagging combine then you needed an extra crew member whose job was to manage the filling of sacks. That just doesn’t happen any more.