Wordley’s were the forerunners of the Wiltshire Agricultural Engineering Company. They had premises in The Market Place – a site which had formerly been Fred Sayer’s bus depot. This area can be seen well by clicking here.

Wordley’s were a successful company and they took opportunities to create good poster style adverts like the one shown below. 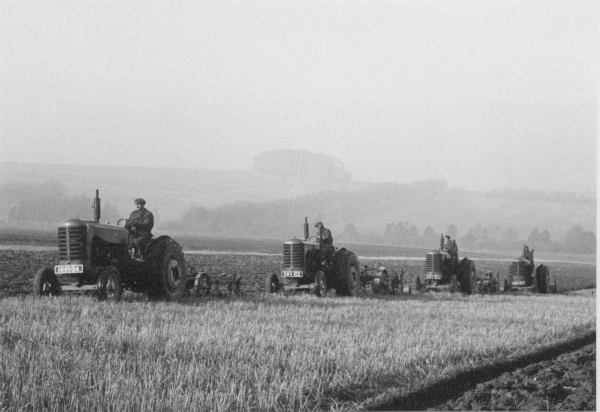 Wordley sold tractors at work in 1951. This large photo used for publicity, is at Market Lavington Museum

This one dates from 1951 and we believe the location was near Urchfont. Four identical tractors are at work ploughing the field. Again, we are not 100% certain but we believe these may be Massey Harris built tractors, possibly model 744.

Wordley’s were once major employers in Market Lavington, as were their successors, Wiltshire Agricultural Engineering. Back in 1986, students at St Barnabas school did various surveys for the BBC Domesday project, now reloaded at http://www.bbc.co.uk/history/domesday/dblock/GB-400000-153000/page/1

In it the youngsters said,

The Wiltshire Agricultural Engineering Company in Market Lavington sells and services machinery like Land Rovers, Tractors and Combine Harvesters. It supplies farmers and other companies.

Twenty six people work there for eight and a half hours a day. It is very hard work but they like their jobs. The most expensive thing they sell is a Combine Harvester. The cheapest item is a split pin which is sold for one penny.

The piece of garden equipment they sell most is a lawn mower. Customers come from up to forty miles away but they do not always buy something. The busiest day is Monday and the busiest time between eight and half past nine in the morning.