You must be kidding

We have several pairs kid gloves, dating from the 1920s, at Market Lavington Museum. They belonged to Mrs Reynolds, who lived at Clyffe Hall. Whether she actually wore them in our village, or just in her younger days before she moved to Market Lavington, we do not know.

This pair of elegant white leather gloves are 54 cm long. What is even more amazing is how narrow they are. There is no way our curator, who doesn’t have particularly large hands, would be able to wear them.

Once the slender handed owner had put them on, then the buttons at the wrist would have been fastened around her tiny wrists. She had other pairs of gloves, in different colours, so we have four pairs of her gloves in the museum. They are lovely examples of  fashionable items from  a century ago. 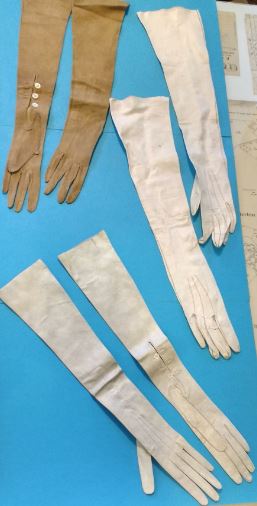