Our Queen Elizabeth II had her Coronation in 1953. For many, this was the dawn of the new Elizabethan age. The war had ended 8 years before, and whilst we still lived in austerity Britain, it was a time of hope for the future. Most rationing had ended and the new cult of consumerism was beginning. It was time for manufacturers to try out new styles with a look  to suit the new age that was just beginning.

And what better than to update the old ideas for Coronation memorabilia. We have seen an  elegant glass produced for the 1937 Coronation of the Queen’s father, George VI. It was time to produce a new item with a new design.. With austerity ending it was time for a touch of glamour, with gold (coloured) logos and rims to remind people of earlier ages of plenty.

Or maybe it was time to drown sorrows, for this was a glass for whisky or other shorts – and came in a box of six. 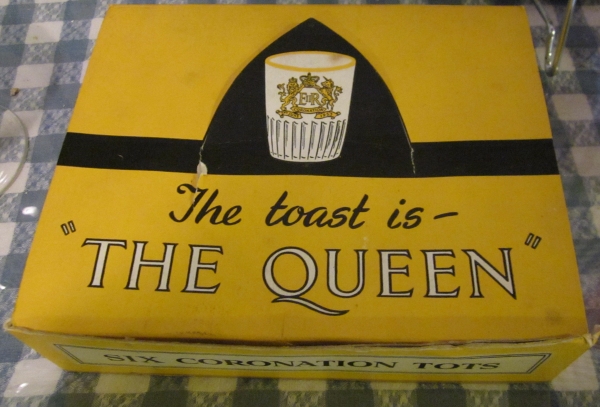 At Market Lavington Museum, we have the boxed set of six Coronation Tots and, of course, the toast was, ‘The Queen’.

These glasses, like the 1937 glass, were part of the décor at the Clyffe Hall Hotel.