A few days ago this postcard dropped through our curator’s letter box in an envelope and with accompanying letter. 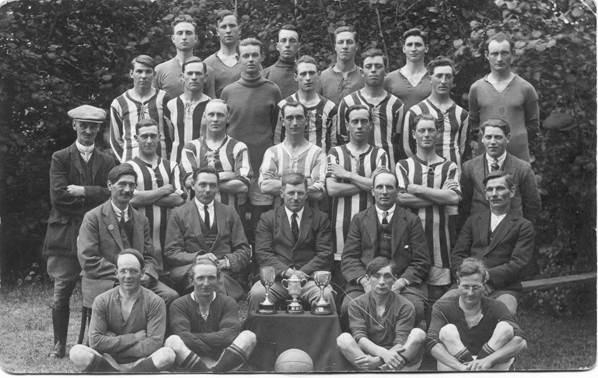 A football squad – but which team is it and when?

The sender, a lovely chap who has suffered a stroke and is bedridden, thought, for a very good reason, that this was the Market Lavington and Easterton Football Club.

The good reason is that this is a Burgess card. The publisher is mentioned on the back.

The card is by Burgess Bros of Market Lavington

This dates to between the two world wars. And as we see, Burgess Brothers were a Market Lavington company, based on High Street, near the present Co-op.

However, at the moment we recognise nobody in the team. In particular, we’d have expected Bill Elisha to be amongst those present and we don’t spot him. Alfie Alexander was also part of the management of the club and he definitely isn’t there.

We are, of course, more than happy to be proved wrong. We hope somebody out there can put us straight.

If it isn’t our own local team, it is likely to come from a nearby village. We could suggest Urchfont, Potterne, West Lavington, Tilshead, Shrewton, Worton, Marston, Great and Little Cheverell or maybe Erlestoke as possible places where these lads played.

Once again we appeal for help in telling us more about this squad and maybe what trophies had been won and when.