Sovereigns and half sovereigns sound like treasure from a past age, probably made of gold and probably worth a small fortune these days. That certainly isn’t the case with a half sovereign at Market Lavington Museum. This is another item found by metal detectorist, Norman, on the old recreation ground. It certainly isn’t gold and it isn’t particularly old. But it is surprising.

Let’s not leap ahead, though. First of all, what is a sovereign in money terms? It is, simply, another word for a pound and such coins were in normal circulation (for the rich) until 1932 and they were made of gold.

But what we have is a very cheap metal half sovereign – a Co-op token one. 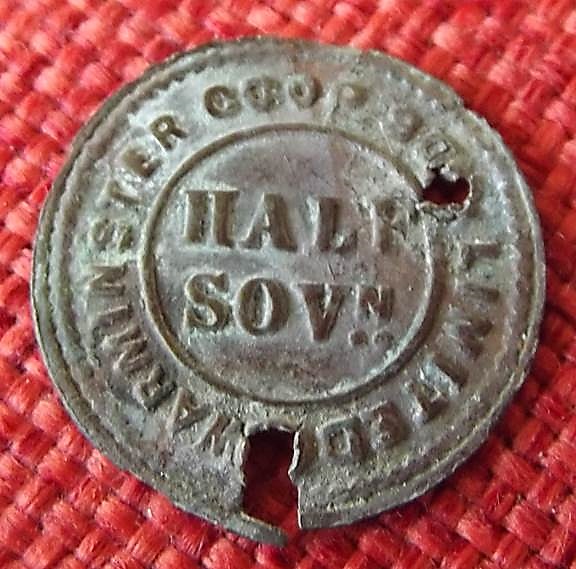 As we see, it is battered and damaged but was issued by the Warminster Co-op

We think this was a dividend check. Such tokens were given to Co-op members to match the cost of their purchases. When it was time to collect the cash dividend, the member could take all their checks to a Co-op and the dividend due to them could be calculated based on the value of purchases. This means such a token wasn’t worth half a sovereign. If a dividend of 5% was declared it was used to exchange for 5% of half a sovereign which we’d call 2½p in present money.

You can read more about Co-op tokens at http://www.tokensociety.org.uk/topics/co-op.shtml .

Most Cooperative Societies abandoned metal dividend checks by the 1920s but in some areas they stayed in use until the 1960s. We don’t know when the Warminster society went over to paper records but it seems a fair bet that this item is close to 100 years old.