A photographic portrait of Jack Welch

We’ll start with a reminder that the letters Jack sent home from his First World War service can be seen 100 years after the event at www.jackwelchdiaries.wordpress.com .

But here we have Jack (He was actually James) in much later life sitting at his desk and working at some kind of ledger.

We don’t have a year for this photo but the location was a room the family called ‘The Blue Room’ at Beech House on White Street. 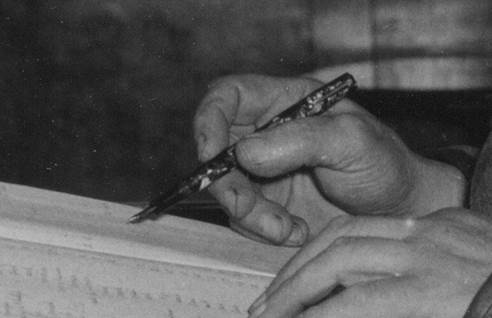 There we see Jack’s hands and a rather lovely fountain pen. The pen would be a museum item now – indeed we have a similar if less ornate one (click here).

Sadly, we can’t quite make out what Jack was working at.