A recent gift to Market Lavington Museum is  a 1939 made portable radio. This was bought by John and Florence Williams of Easterton Manor and later, one of their grandchildren used it out in the fields when he was farm working.

The radio – it would have been called a wireless back then, is an Ever Ready  model 5214. 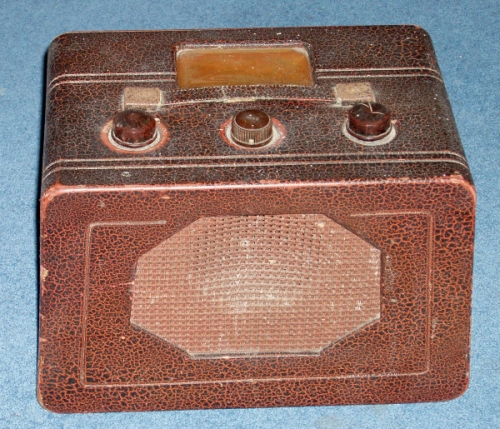 For the technically minded this set was a ‘super heterodyne’ and received analogue channels in the medium and long wave bands. It has a wood case covered with what we assume is mock snake skin. The Bakelite knobs match this covering to perfection.

To use this radio you needed two dry batteries – a 1.5 volt and a 90 volt one. There is space for these in the case which opens with four screws.

The fitted speaker is of the moving coil type.

We can imagine the radio being used to listen to the announcement that Britain was at war in September of 1939 and it may well have been used to listen to some of the grim news that followed. But in 1945 the war ended and the radio may have carried this happy news.

We have no idea if the radio still operates but it portrays the style of its era.