Our curator remembers a pun from his student days which went, ‘she was only a welder’s daughter but she had acetylene legs’!

At Market Lavington Museum we have acetylene lamps and here is one of them. 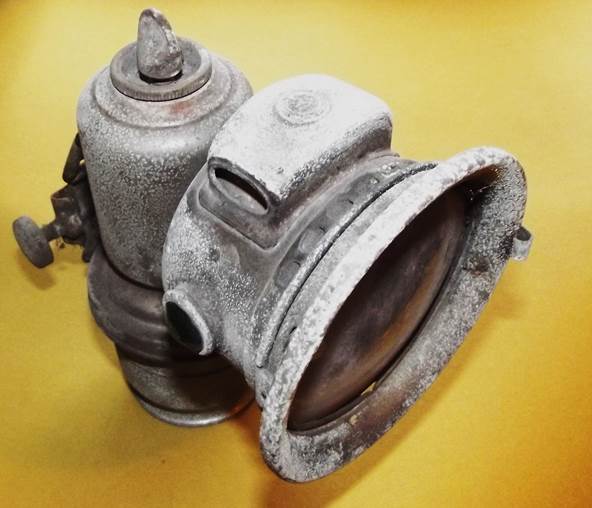 This is a motorbike headlamp and has the sort of clamp to allow it to fit on a standard lamp bracket. There’s a container for calcium carbide at the bottom and a drip feed water tank above it. The acetylene gas produced is fed to the burner where it produced a bright flame which was ‘concentrated’ by a reflective mirror to give a good beam of light out of the front.

This lamp was owned by the Williams family of Easterton and was cleared out of a barn at Court Close farm and given to the museum. It has suffered some of the ravages of time and the metal body is somewhat pitted and corroded, But it is still a lovely item and reminds us that electricity was not always king.

These days, with the growth in LED headlamps, maybe we should be finding a local example of a filament bulb headlamp to save.