Recent communications regarding Mr Milsom’s garage continue. Rosemary has sent a copy of an apprenticeship indenture as shown below. It concerns her father being apprenticed to Mr Milsom. 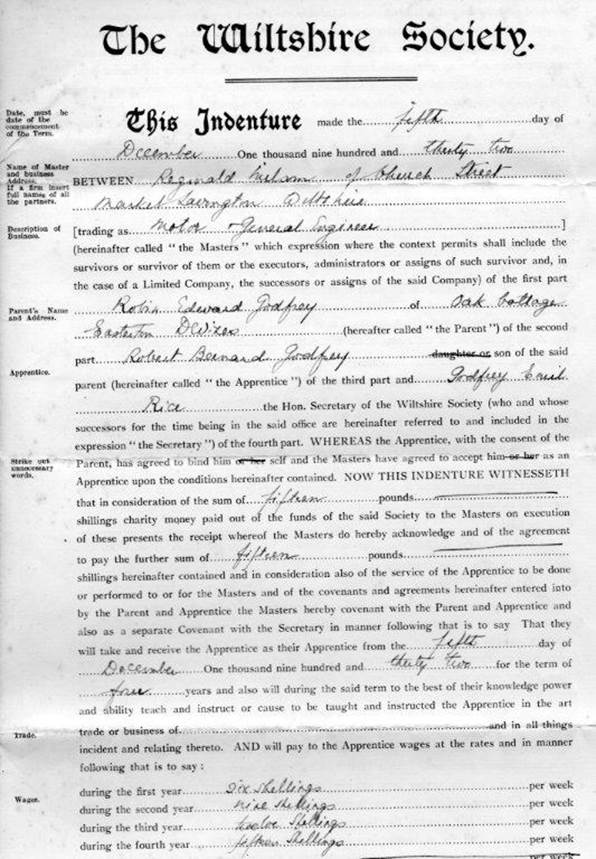 As can be seen, this is mostly a pre-prepared form with a small amount of handwriting needed to complete the document. It reads

This indenture made the fifth day of December one thousand nine hundred and thirty two BETWEEN Reginald Milsom of Church Street, Market Lavington, Wiltshire trading as a motor and general  engineer (hereinafter called “the Masters” which expression where the context permits shall include the survivors or survivor of them or the executors, administrators or assigns of such survivor and, in the case of a Limited Company the successors or assigns of the said company) of the first part Robin Edward Godfrey of Oak Cottage, Easterton, Wiltshire (hereafter called “the Parent” of the second part Robert Bernard Godfrey (hereinafter called “the Apprentice” of the third part and Godfrey Emil Rice the Hon. Secretary of the Wiltshire Society (who and whose successors for the time being in the said office are hereinafter referred to and included in the expression “the Secretary”) of the fourth part. WHEREAS the Apprentice with the consent of the Parent  has agreed to bind himself and the Masters have agreed to accept him as an Apprentice upon the conditions hereinafter contained. NOW THIS INDENTURE WITNESSETH that in consideration of the sum of fifteen pounds – shillings charity money paid out of the funds of the said Society to the  Masters on execution of these presents the receipt whereof the Masters do hereby acknowledge and of the agreement to pay the further  sum of fifteen pounds – shillings hereinafter contained and in consideration also of the service of the Apprentice to be done or performed to or for the Masters and of the covenants and agreements hereinafter entered into by the Parent  and Apprentice the Masters hereby covenant  with the Parent and Apprentice  and also as a separate covenant with the Secretary in manner following that is to say That they will take and receive the Apprentice as their Apprentice from the fifth day of December One thousand nine hundred and thirty two for the term of four years and also will during the said term to the best of their knowledge power and ability teach and instruct or cause to be taught and instructed the Apprentice in the art trade or business of….. and in all things incident and relating thereto. AND will pay the Apprentice at the rates and in the manner following that is to say:

during the first year six shillings per week

during the second year nine shillings per week

during the third year twelve shillings per week

during the fourth year fifteen shillings per week.

Odd that the trade that young Robert Bernard Godfrey was to learn was not shown. Unlike youngsters who were bound apprentice 100 years earlier, at least Robert had a little money and could lead, legitimately, a bit of his own life.