Another view from the church tower

Maurice Baker is a former bell ringer at St Mary’s Market Lavington. No doubt this gave him access to the tower which, of course, gives scope for semi-aerial views of the village. We have recently been given two series of photos taken by Maurice. One set was taken in 1981 and our chosen image for today comes from that set. We are particularly pleased to have this photo for it gives us a rare, and good view of the former garage sometimes known as the Spring Filling Station. 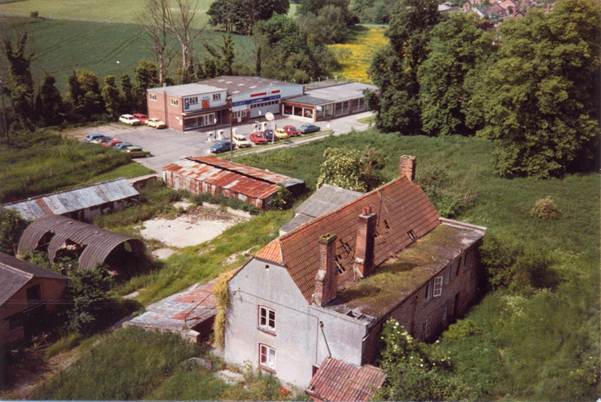 In the foreground we have the derelict buildings of Grove Farm. The house  has certainly lost some of its tiles and the farm buildings look to be less than weather proof in places.

That whole area has now been swept into oblivion and has been replaced by our wonderful Community Hall and its carpark.

Beyond we see the garage which, at the time was owned by Mr E J Haines. Later it became Shire’s Garage.

During Mr Haines’ time, the garage was an agent for Fiat cars and the showroom, at the right hand end no doubt had a goodly display of these Italian cars.

Next to that, under the slightly pitched roof there was the workshop where cars of all sorts could be repaired and serviced. The two storey building at the left hand end housed the shop with offices above. There were four petrol pumps on the forecourt. The price appears to be £1.50 (or so) but that is per gallon so that’s about a quarter of the current price – not that you can get petrol in Lavington any more.

At the front of the forecourt there are 2nd hand cars for sale. At thwe left hand end there’s a row of cars awaiting attention in the workshop. The three near the back of the building were probably in need of something major.

Now Shires Close stands on the site. Not a trace of a garage remains.