The Old School was built in the early years of Queen Victoria’s reign. No doubt its three classrooms seemed perfectly adequate then. Class sizes could be huge and pupils sat at their desks all day.

But times changed. School leaving ages were successively raised up to 15 which meant more pupils had to be housed. Curricula got more adventurous too and that required more space. Over the years some classes were farmed out to other buildings and then, when the old school house became available, the school moved into it. Part of it became the space for arts and crafts and that’s what we see children doing here. 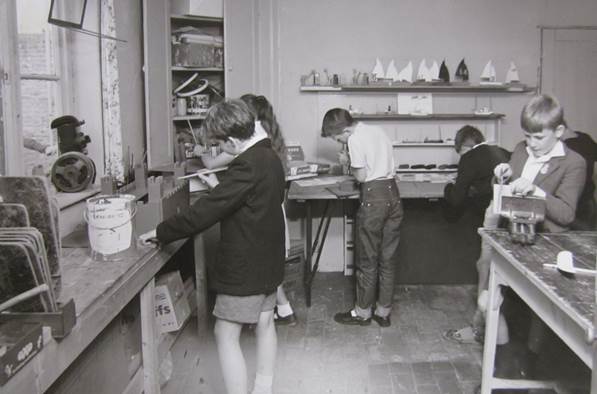 Arts and crafts in the old school house in about 1963. This is now the kitchen in the museum.

On the left we see a lad painting a castle keep. A girl behind him also has a paintbrush in hand. At the back, the lad in jeans with the big turn ups is wielding a drill whilst the lad on the right is sawing.

On the back wall some shelves are filled with sailing yachts and other boats. The windowsill appears to have a small motorbike engine on it.

We think this photo dates from about 1963.

This room had once been the kitchen when the room was a house. These days it is our kitchen display room at the museum.