Yesterday we featured a photo which included Mr Lawrence Kitchener Cooper as a man in his early 20s. Today we move on 16 years, by which time Lawrie was a married man, approaching the age of 40. He was now behind the camera taking the photos.

The scene is the Davis Field. That name is now all but forgotten. It’s the football field at the top of Northbrook, using land donated by the Davis family who lived on Northbrook.  The year is 1953 and Lawrie Cooper is using his camera to record the fun and games and other happenings at the time of the Coronation of our Queen, Elizabeth II. What we see here is a table, covered in Coronation mugs for the youngsters. 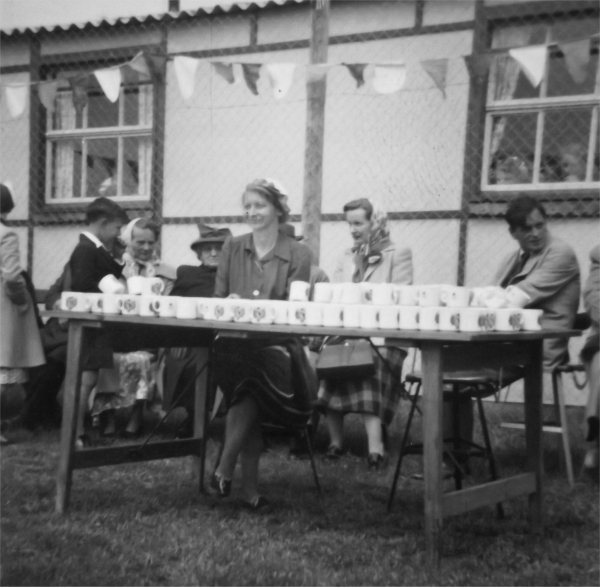 Table of Coronation Mugs in 1953. These are under the watchful eye of Mrs Elisha, the long time infant teacher in Market Lavington

Do you know, we don’t have one of those Coronation mugs in Market Lavington Museum. Has anybody got one they’d  be willing to let us have?

And who is the lady deputed to look after the distribution of mugs. Yes, it’s Mrs Elisha. What a career that lady had. If you talk to people over 90 who have lived in the village all their lives, then Mrs Elisha was their infant teacher. If you talk to sub 40 year olds, then some of them remember Mrs Elisha as a supply teacher. What better person to make sure every child – she’d have known virtually all of them – got their mug.