Bert or Herbert James Burnett to give him his full name was born in Easterton back in 1895. His father, Henry, was a market gardener at first but by 1911 he had become Easterton’s sub postmaster and the family, including young Bert, lived at the Post Office. By then, Bert was an apprentice blacksmith working just up the street in Easterton at the village forge.

When the Easterton forge closed the equipment was purchased by the Gyes in Market Lavington and they also took on Bert and his brother who was a wheelwright.

He married Elsie Lucas at Potterne Church in the spring of 1922. Although the couple lived in the Potterne area, Bert continued in his Market Lavington blacksmith’s employment.

In later life he and Elsie moved to Southbroom Road in Devizes and it was there they planned to quietly celebrate their Golden Wedding in 1972. 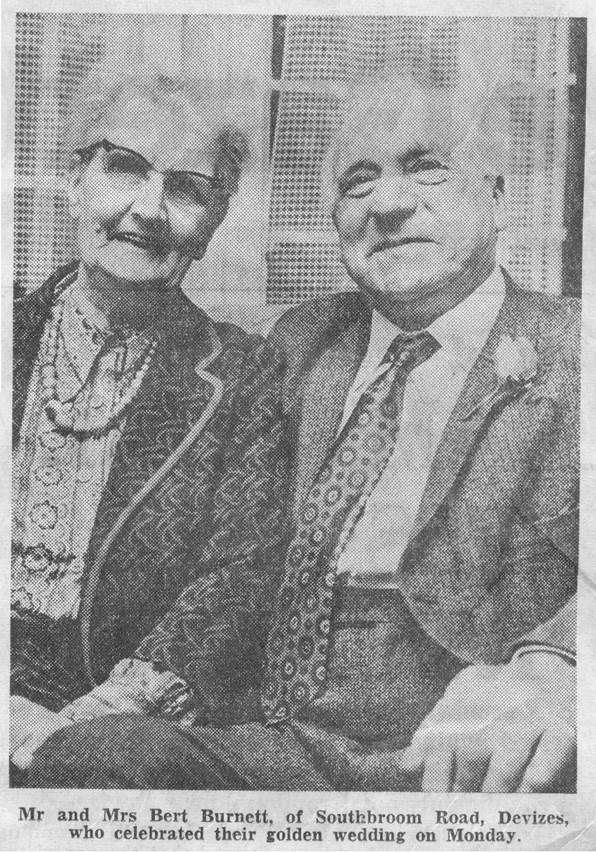 Bert and Elsie Burnett celebrate their Golden Wedding in 1972

It seems other members of the family didn’t go along with the quiet celebration and a family ‘do’ was organised and clearly the local paper reported the event.

Bert is certainly remembered at Market Lavington Museum and has been featured on this blog in the past. You can click here to see Bert at work as a farrier in Market Lavington.