Broadwell – always pronounced by locals as two distinct words with an emphasis on ‘well’ – was the main water supply for Market Lavington. As late as the 1930s people came down to the spring with their bucket to collect the wholesome water which flowed out from the downs there.  Some people continued to use this source as their water supply until after World War II, believing it to be better than water piped to houses.

But it was also always a playground for children. Youngsters, it seems, only have to look at a stream to start pondering on how to build a little dam across it. Youngsters also love paddling, playing with boats or even playing the game invented by A A Milne of Pooh Sticks.

Our photo today shows Broadwell in the 1950s with some youngsters who are just messing about in or by the water. 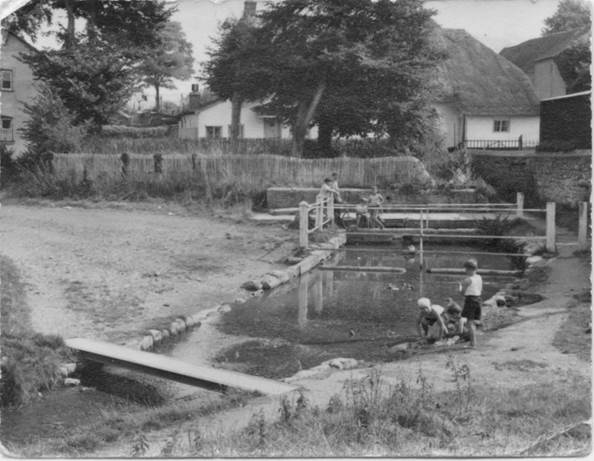 The scene is recognisably the same now although there have been many changes. The upper pond is no longer fenced. It used to be to ensure humans could get clean water from there whilst animals had to get their vital liquid from points below that fenced area.

The little wood, fenced off by palings, was felled in the 1960s, apparently it was deemed unsafe. A young children’s play area was constructed, very much with a 1960s space age theme. That play area, devoid of safety precautions has been replaced by the present one.

The little concrete footbridge in the foreground had been built as an alternative to the ford where the nearer group of boys are playing. It is still there.

The big change, though, is that these days the area is a car park and normally has a goodly collection of vehicles in that area to the left of the water.

It’s a charming scene, redolent of that age of innocence, when children were allowed to be young and to have a bit of their own fun.