This is a still from a promotional film shot and edited by Peter Francis during the inter war years.

The film shows the full process – and we really mean full – of getting meat from farm to door. Much of it is far too graphic for present day sensibilities. We have a full copy at the museum, but certainly wouldn’t show it.

At this time the company was called Doubleday’s to become Doubleday and Francis. They occupied the butcher’s shop still operating as such – where the Douses now sell their top quality products.

Back in those days – some 80 or so years ago, Messrs Doubleday and Francis operated a pair of vans for meat delivery. It quite amuses many of us that supermarkets invented delivery a few years ago. It used to be the norm – certainly into the 1960s. Our curator tells us he had a holiday job when he was a student, which involved driving a van and selling meat. That was for quite a different butcher elsewhere in the country but just shows it was the norm. Here, from the film, is one of the Market Lavington vans. 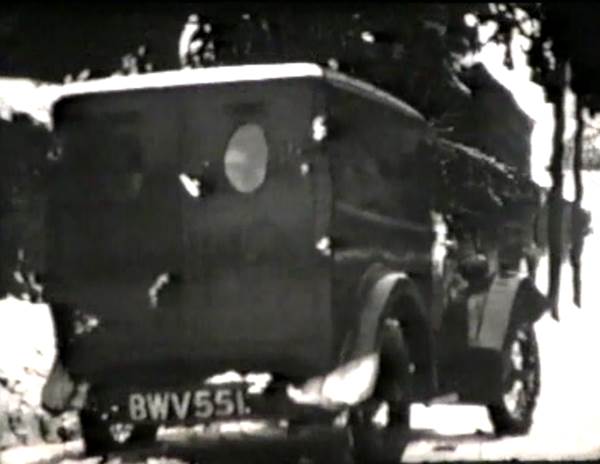 The weather was clearly bad with snow on the ground, but still the butcher got through, delivering his meat.

The photo quality is understandably poor. We do not know what it was originally shot on – probably the little 8mm film. It has been copied onto VHS video tape and then copied to a digital format. But it does give an idea of those 1930s days.