Here we have yet another ‘found under the floorboards’ collection from 21 Church Street. 2015 was the year of ‘Lost and Found’ at the museum as we featured metal detector and other finds dug up in our parish. 2016 seems to have started with a similar theme.

At the moment, five very nice clay marbles have been located under floorboards. Bob, who lives there and is doing the renovation work expects there to be more. 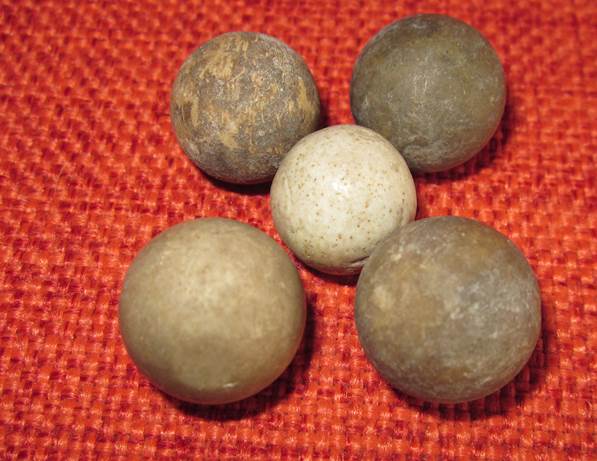 Clay marbles found under the floorboards at 21 Church Street

As can be seen, these marbles vary in size a little. The central one appears to be of a different material.

Marbles is a truly ancient and world-wide game. Marbles have been found in archaeology sites all over the world, dating back thousands of years. Early marbles are thought to have been naturally made. Mass production of clay marbles began in the 1890s. Prior to that they had been hand-made, one at a time. It was mass production that made marbles very affordable.

These days, of course, ordinary marbles are mass produced in glass with art marbles being hand made.

Our curator, who’d have been a marbles player in the 1950s doesn’t recall seeing clay marbles in use. ‘It was all glass marbles’, he says. So we rather assume these marbles probably date from before World War Two. They are possibly 19th century, but it is more likely that some poor lads, possibly in the Hopkins family for they occupied 21 Church Street, lost these marbles, irretrievably at the time, in the early years of the 20th century.

These are lovely items to add to our burgeoning ‘Lost and Found’ collection.