Simple chance can cause quite big impacts and Drove Lane is what it is now in part due to chance. Its name has changed over the years. At one time it was ‘The Drove’. Then the cemetery was created and it became ‘Cemetery Lane’. Then, perhaps because people didn’t like their home address being associated with death, it became Drove Lane.

Drove Lane was never given a road surface throughout. That was the chance fact of it being quite near to and parallel with the Parsonage Lane route north out of the village. So Drove Lane became a quiet byway.

Well that was until 1971 when its position – handy for both Market Lavington and Easterton – made it the ideal site for the new St Barnabas School which replaced the Victorian village schools in both parishes.

Back then, in 1971 the road, and specially surfaced footpaths, became busy with mums walking their children to and from school. These days, that carriage of children is much more often by car as a parent then has to get to work straight after dropping off the kids.

A large electricity substation was also constructed alongside Drove Lane. I dare say the occupants at the cemetery, next door, didn’t complain about it! That substation shows on our pre-1971 photo. 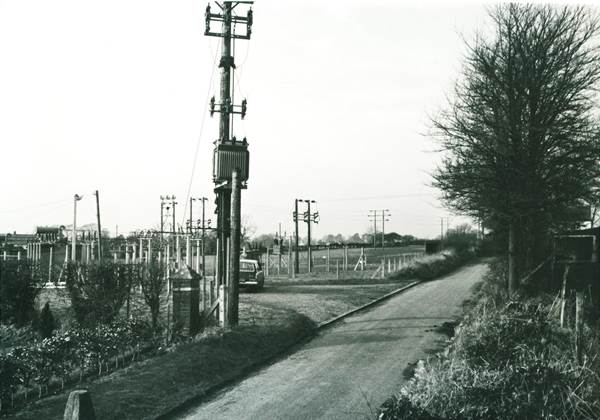 Drove Lane in 1968. It shows the site of the proposed new School

The car in the photo was registered in 1966 but there is no school to be seen. The photo dates from 1968 and is actually captioned ‘site for new school’.

Apart from the absence of a school, we’ll note that Drove Lane had no pavements. They were added to make for safer access to the school. We are fascinated by the brick ‘gate post’.

Does anyone know what that was for?

A second picture shows a similar view with the school nearing completion. It was taken in 1971. 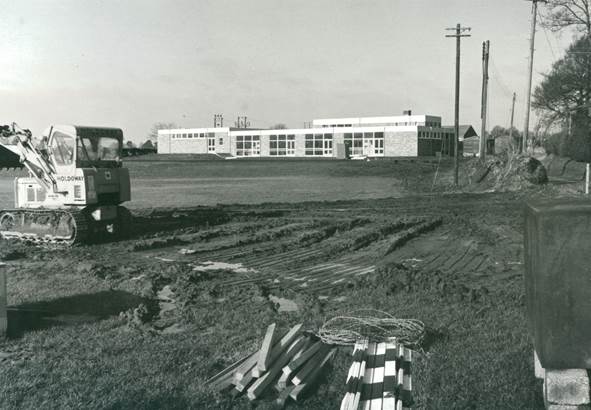 At this time the road was improved and the pavements put in. The footpath from Oak Lane and beyond was given a tarmac surface as was the one from the top of Northbrook.

This school, of course, is still thriving with local youngsters who are often in local events.