As this is written, the Drummer Boy pub stands idle and empty. The sign still hangs over the pavement, the blackboard still announces upcoming events, but this pub has now been closed for some time as it awaits new owners and, probably, conversion to dwellings.

It took the name of The Drummer Boy in about 1970 to commemorate the legend of the dead drummer. Events in that tale are supposed to have happened up on Salisbury Plain in the parish of Market Lavington. Formerly it had been The New Inn. It wasn’t new in anybody’s memory but the name changed when accommodation was no longer offered. Places called ‘Inn’ offered overnight stays so the name had to change. At the time, with the new Fiddington Clay estate being largely military, a name implying a soldier was probably a good idea.

We have some photos, some given to us by the daughter of a former landlord who still lives in the village, but other memorabilia has largely evaded us. However, we have a menu – probably from the 1990s or maybe even the early years of this millennium. 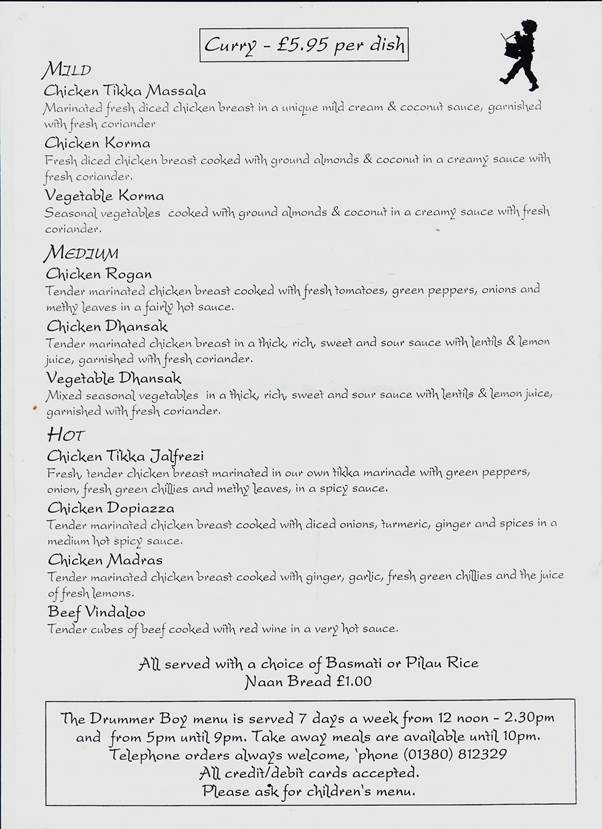 The Drummer Boy clearly tried to find custom by being a curry house.

Of course, in a fortnight we open for our 2016 season which features a display on the pubs in our two villages so you can discover and enjoy more by visiting the museum.