Easterton has changed quite a lot in 50 or so years. We’ll see a few of the changes in this aerial photo taken in 1970. 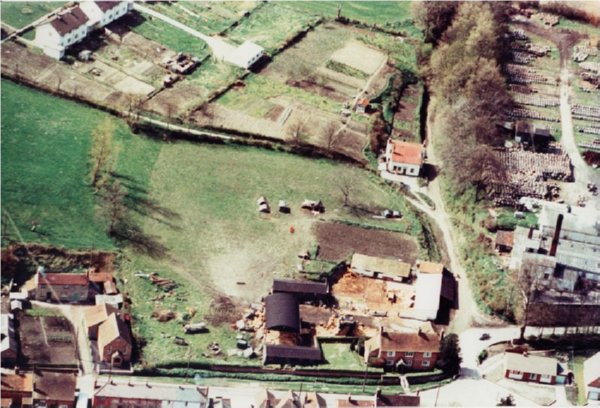 Easterton from the air in the 1970s

We could start at the top left with some of the houses on Hayward’s Place. Residents there may not know that their road is named after Ben Hayward who occupied the house ‘Kestrels’ for much of the nineteenth century.

A path, from just below those houses leads diagonally across the picture and passes in front of Woodbine Cottage. This white building under a red roof was the home of Samuel Moore. He started producing jam on a cottage scale from this house which is situated on what now gets called ‘Sam Moore’s Lane’ or ‘The Drove’. Of course, his business expanded and when this photo was taken almost all of the land to the right of Woodbine Cottage is occupied by the jam factory. Much of the area has stacked up barrels of fruit. Once upon a time it had been grown locally but, by the 1970s, it was mostly imported fruit that was used.

You can see much more about the jam factory at The Museum Miscellany on 15th September this year.

At the bottom right of the picture a bungalow stands where once there was the entrance to Easterton School. Easterton School closed its doors in 1971 when the new St Barnabas School opened serving Market Lavington and Easterton.

We can now work back to the left along High Street. The house and buildings of Halstead Farm stand out clearly. The house is still there but more housing occupies much of the site around it now. Towards the left there is the former Methodist Chapel. That is now a dwelling house. The church members became a part of Trinity Church, which now meets in the Community Hall in Market Lavington.

We can just see the tops of houses on this side of High Street. That area is pretty well unchanged today.