Easterton – opposite the church

The houses in this post card still stand at the Urchfont end of Easterton, but they have been substantially altered in some cases. 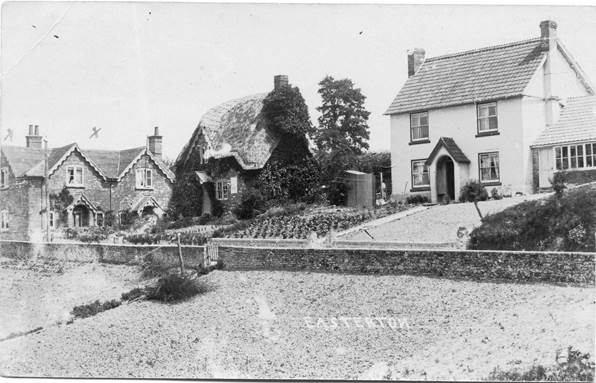 Houses opposite Easterton Church in 1919

The central, thatched cottage may have been entirely demolished and a new building erected which looks much more like the one on the right. That now has a two storey extension on its right hand side, rather than the single floor one we see in the photo. The house at the left end looks to have been two semis when the photo was taken. It is now one much larger home.

This post card was sent in 1919 so the original photo was taken before then. We’ll note that the end house has been marked by Xs by the sender so let’s look at the back of the card. 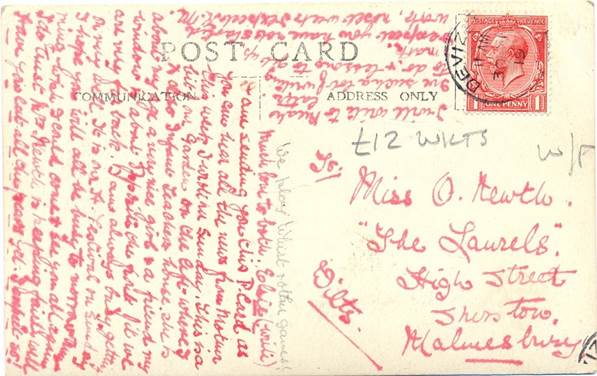 We’ll start by saying this has been given to the museum. We did not pay £12 for it. Next, we can’t trace the recipient who seems to be called Miss O Newtlo. Nobody with that surname was listed on the 1911 census. But the message has some interest. 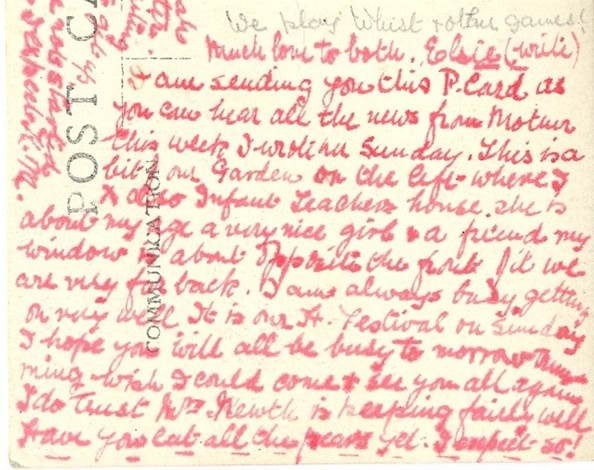 Picking out odd passages we have:

‘This is a bit of our garden on the left. Also infant teacher’s house. She is about my age, a very nice girl and a friend.

It is our H(arvest) Festival on Sunday.’

The card continues round a right angle.

‘I’ve such a lot of writing to do and lessons to get up and mark.’

It appears to be signed K. M.

Now we take some guesses. K. M. was the junior teacher at Easterton School. I wonder if she started that job in September 1919. Comments like ‘I am getting on very well’ sound like the words of someone starting out on a new venture.

It seems she lived near her friend and colleague, the infant teacher.

Maybe somebody can tell us more about these former teachers who predate Miss Windo, the well-known, long term Easterton teacher. She’d have been about 14 when the card was sent and, no doubt, at home near Bradford on Avon.