This blog post stems from an almost chance find amongst our curator’s personal collection of old 78rpm records. It wasn’t any specific record, but rather the sleeve containing it that caught the eye for it was the sleeve provided by a Devizes music shop. 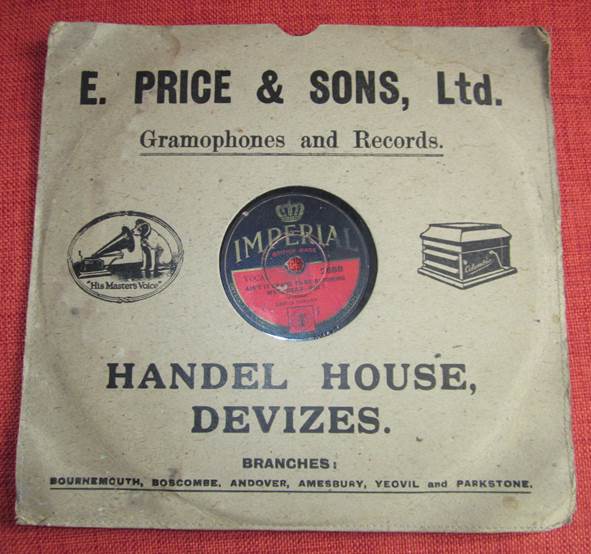 The record itself is not relevant to this story. It amused our curator to use this sleeve for a record which may have been manufactured by his family members in Tonbridge, Kent – for that’s where this record was actually produced.

But perhaps the name E Price rang some kind of a bell with Rog or maybe it was just curiosity. He tried to find out who he was. Now we think this sleeve dates from around 1930 but Rog looked him up in censuses and the first one he tried was the 1901 census. And there, next to Albion Place (where Handel House still is) was Ezra Price a music/pianoforte shopkeeper who had been born in about 1825 and the birthplace was given as Market Lavington.

Earlier censuses gave the birthplace as West Lavington so Rog’s mind immediately wondered if he might have come from Fiddington, that strange long thin strip of land, between Market Lavington and Easterton. Fiddington had been a part of West Lavington but in some sensible reorganisations it became a part of Market Lavington. So E Price was ‘one of ours’ and his name obviously stayed on his music shops long after he died – which was 1904.

Ezra was born on 16th November 1824 and was baptised at the Independent church in Market Lavington on 9th January 1825. His parents, James and Susanna, did indeed live at Fiddington.

Ezra married Lucy Denniss in 1847 and in 1851 the couple lived at Townsend in Market Lavington along with a couple of children.

Ezra appears twice on the 1861 census. He is with his wife and family at 17 Brittox Devizes, but also with his brother and mother at 212 Church Street in market Lavington. His brother was Enos who ran the Hope Coach between Lavington and Hungerford.

By 1881 Ezra and family were at Handel House.

An obituary for Enos of the Hope Coach mentions Ezra.

He was the last surviving child of the late James and Susana Price, and brother to the late Mr. Ezra Price of Handel House, Devizes.

This comes from the Hungerford Virtual Museum at http://www.hungerfordvirtualmuseum.co.uk/ .