Famous folk at the Green Dragon

Today we are quoting from a book called ‘Forever England – The Life of Rupert Brooke’ by Mike Read. This was published in 1997 by the Mainstream Publishing Company (Edinburgh) Ltd ISBN 185158 995.

For those not familiar with Rupert, he was the poet who wrote ‘The Soldier’.

IF I should die, think only this of me:
That there’s some corner of a foreign field  that is forever England.
There shall be in that rich earth a richer dust concealed;
A dust whom England bore, shaped, made aware,
Gave, once, her flowers to love, her ways to roam,
A body of England’s, breathing English air,
Washed by the rivers, blest by the suns of home.

And think, this heart, all evil shed away,
A pulse in the eternal mind, no less
Gives somewhere back the thoughts by England given;
Her sights and sounds; dreams happy as her day;
And laughter, learnt of friends; and gentleness,
In hearts at peace, under an English heaven.

The sad fact is that Rupert became a victim of World War One in 1915 – a death due to a mosquito bite rather than enemy action. His corner of a foreign field is on the Greek Island of Skyros.

However, we can be cheered a little by knowing that Rupert experienced the pleasures of The Green Dragon in Market Lavington. Here’s an extract from the book. 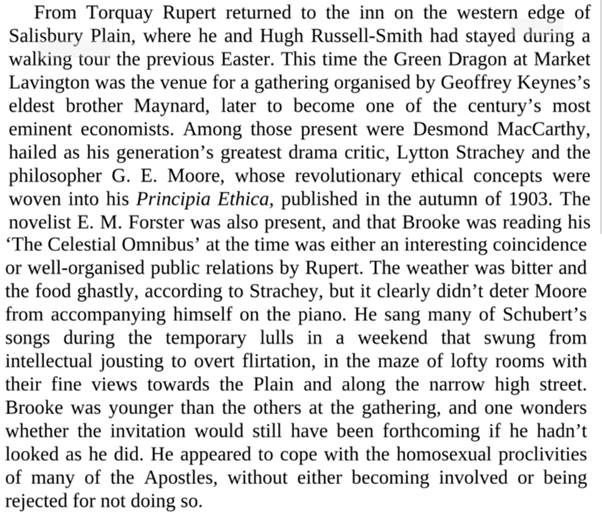 This was in 1908 – and what a gathering it was. For a while, The Green Dragon was the place to be for people of a philosophical bent. It must have been some get together with Maynard Keynes, Lytton Strachey, E M Forster, G E Moore and Desmond MacCarthy. Oh, and young Rupert Brooke, as well. The flies on the wall, if there had been any, must have had a fascinating time.

Some things change and others don’t. Visitor to ‘The Dragon’ will still get similar views and who knows, it could be bitterly cold outside. But the food certainly will not be ghastly.

For the record, Rupert fell out with this rather Bohemian group and suffered a breakdown as a result.