Easterton Echoes is a good source of reminders of what was happening in the last 40 years. These extracts come from the September 1976 issue – precisely 40 years ago.

Local news item on the retirement of Dr Ashford Brown

Back in 1976 we were before the computer age. Desk top publishing was still in the future. Duplication was from stencils cut by typewriters and it all looks really quite amateurish these days. Mind, it is not helped by somebody forgetting to change the month and it being crossed out and then hand written.

But the news item refers to the retirement of Dr Ashford Brown who had been the local doctor since the early 1950s. He chose a bicycle as his retirement present from the good folks of Easterton.

A verse reminds us of one of the top stories, both locally and nationally, of 1976. This was the year of the drought. It was a year in which the government created a special minister to deal with the effects of a real water shortage. 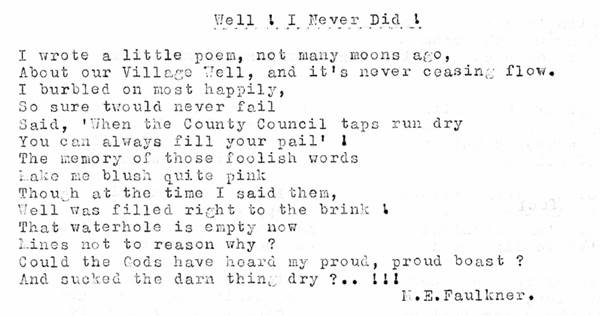 A verse reflecting on a story of local and national importance

Well done to M E Faulkner, and well done, too, to that Minister for Drought. Almost as soon as he was appointed the heavens opened and many of us went out to stand in the rain, laughing and smiling and chatting with one and all. The drought was over.