From The Fives Court

Lords of the Manor enjoy their expensive pursuits. A part of the Pleydell Bouverie empire was the racquets court and no doubt many folks enjoyed thrashing a ball around in that building. Eventually, it became a dwelling and one owner didn’t like the name ‘Racquets Court’ and changed it to ‘The Fives Court’. The two games are different and later owners changed the name back to what the building was – ‘Racquets Court’.

But at the time of this photo it was called The Fives Court. It was 1972. 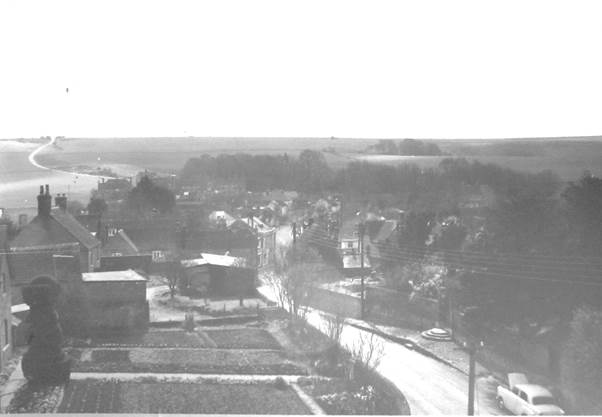 A view from the Fives Court, Market Lavington

The building was undergoing alterations and had scaffolding up. This allowed an intrepid photographer to scale the heights and get different views of Market Lavington from a high vantage point. This one is looking down Parsonage Lane to the village centre.

We can see, at the left edge, the lovely topiary at number 8 Parsonage Lane. This has featured before on this blog (click here). The neat rows of plants in that front garden would suggest that it was used for vegetables.

On the right hand side a car has its bonnet up so presumably is receiving attention. In front of it there is the delightful stepped entrance to The Old House which had also been a part of the Pleydell Bouverie estate in Market Lavington.

Roughly in the centre of the photo we are looking at the crossroads and can see a building which fronts on to White Street. That was once the centre of the Market Lavington department store owned by Arthur Walton. By 1972 what was left of the shop was a small clothes shop – where the hairdresser is now.

And once again we have that regular backdrop for our village under the plain – Lavington Hill.

We are actually looking along what was once the main road from Devizes to Salisbury. Parsonage Lane, White Street and Lavington Hill were all parts of this major thoroughfare. It changed when Salisbury Plain became a permanent military training area in the early years of the twentieth century. It was only then that the present main road, through West Lavington took over as THE route.