Today we look at a photo which oozes charm. It is redolent of a past era when life was simpler. 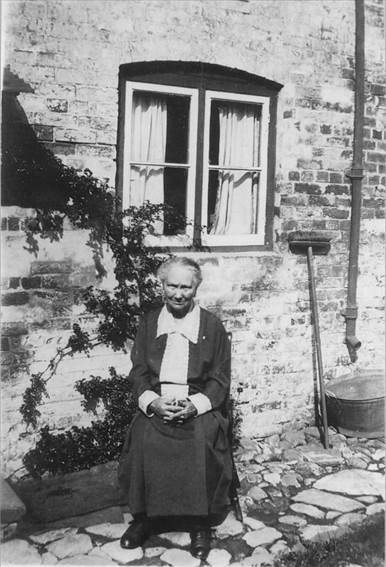 Ignoring the lovely lady for a moment, we see the downspout from the gutter leading to a galvanised bath. Collecting rainwater was important. The bass broom leans against the wall. The crazy paving path looks spotless so perhaps the broom had just been used. Another galvanised bath is in use as a planter.

And now to Grandma Clelford herself. Her first name was Emily and she had been born in about 1859 in Market Lavington. She’d have been in her 70s when this photo was taken. She was born Emily Elizabeth Pinchen and was little more than a slip of a girl when she married Henry Clelford in 1876. Unfortunately, official records have Henry’s name as Culford which only goes to show you can’t always trust the records. Somebody, way back when, has failed to read Clelford properly!

Henry and Emily made their home in Easterton which was where the Clelfords came from.

The 1911 census tells us that Henry and Emily had been married for 35 years and had had 15 children – all still alive at that time.

Henry died in 1923 so this grand old lady was a widow when the photo was taken.

Our thanks to Jim of Wakefield for sending us this lovely picture.