We have had burial registers for Market Lavington for many a year and they are useful. They tell us who was buried, how old they were sometimes where they lived and who conducted the service. But just where the grave was dug is not included. Many (probably most) graves are not marked with a stone. Stones were too expensive for most working families. And the soft local stone used doesn’t weather well. Or rather it weathers far too well and engraved inscriptions become unreadable. So for most people, finding the precise location of a burial has proved impossible.

However a book containing positional information for some burials has just been given to the museum. It starts with the consecration of the New Burial Ground in 1862. This was immediately to the north of the church. 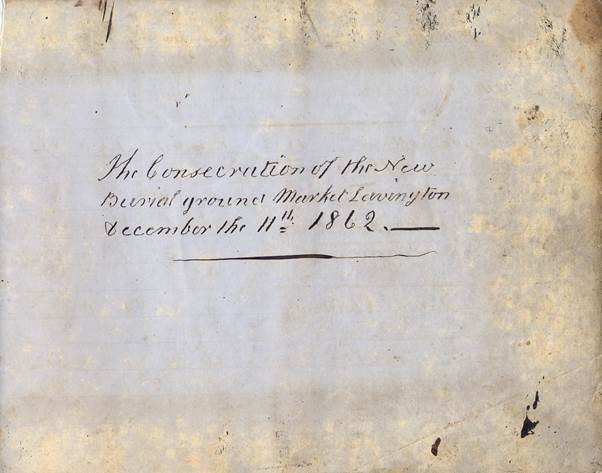 The title page of this notebook of burials

The first burial recorded was on December 12th 1862. This was Mary Perrett who is grave one in row 1.

Let’s look at a page to see how it works. 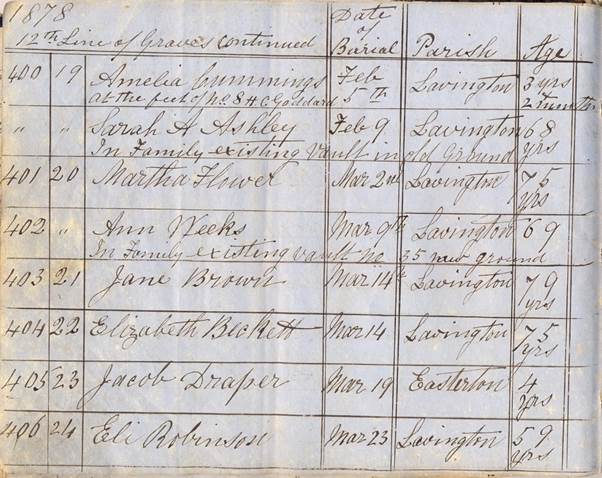 One page of burials, with locations, at St Mary’s Market Lavington

Here we have burials from 1878. Generally the burials are now in the 12th row and here we have positions 19 to 24. But Little Amelia Cummings, aged 3years and two months is actually sharing plot 8 with another small child – H G Goddard. Sarah Ashley has gone into the existing family vault in the Old Ground and Ann Weeks into the family vault in the New Ground.

There is a plan which shows the rows but this is too big to feature in this blog.

The book continues until 1903. It means we have a fair chance of finding, more or less, the location of burials.

The book is too flimsy for use by one and all so we are working on adding the information to our spreadsheet of burials which can then be printed in alphabetical order. Please be patient. This may take some time!