Albert Hiscock, the thatcher who lived on White Street in Market Lavington has featured more than once on this blog. But it is only recently that we were given a photo of his wife, Harriet so today we look at that photo and the lady herself.

So here we see Harriet wearing an attractively decorated dress. 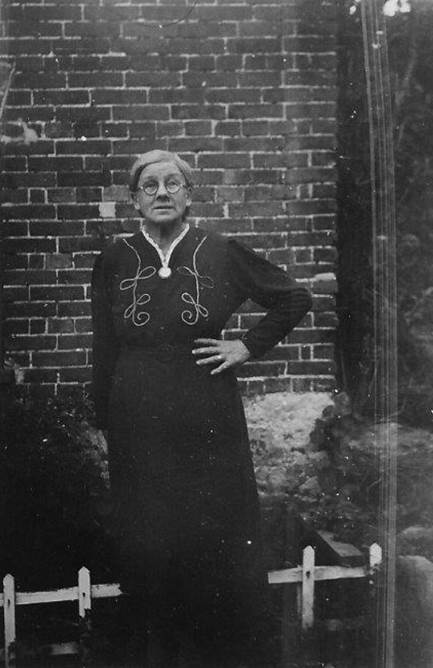 We’ll start her story in the middle – with her marriage for that confirms a maiden name. Towards the end of 1897 Harriet Euena Plank married Albert Hiscock in the Devizes area.

So Harriet had been a Miss Plank before she married.

When we seek information about people, we often turn to the ends of life next and in particular to the local church burial records. These tell us that Harriet Euena Hiscock was buried at Market Lavington on 17th September 1954 and that she was aged 77. It also tells us that she was living at Hillside – the home on White Street in Market Lavington at the time of her death.

So we now know that for Harriet’s origins we need a surname of Plank and a birth year of about 1877. The FreeBMD website tells us that Harriet Euena Plank’s birth was registered in the Devizes area in the second quarter of 1877.

Even with the information gathered, it is not easy to find Harriet on early censuses but we think she was the daughter of Charles, an agricultural labourer and Harriet. According to this 1881 census she was born in Easterton but by 1881 was living in Little Cheverell. In 1891 Harriet was in service and living on Long Street, Devizes. This census gives her birthplace at West Lavington (which on the system we use is mis-transcribed as West Langdon!).

After her marriage to Albert, the couple lived in Little Cheverell and they had produced five children by the time of the 1911 census.

We know, from our electoral rolls, that the Hiscocks moved to Market Lavington after 1926 and before 1939.

Harriet falls off our radar until her burial. Albert joined her in the churchyard some four months later.

Sixty years on there are still people in the village who remember the Hiscocks.