The new season has been underway for a month and so far has gone well. Visitor numbers are good and comments on enjoyment and satisfaction are good too. So far so good and that means our curator is well under way with plans for this year’s Museum Miscellany event which will take place on Saturday 8th October in the Market Lavington Community Hall at 7.30pm.

One topic to be included in the eclectic mix we have got used to is ‘Hospital Week’. Now if that sounds a bit of a drab topic rest assured it is not. For Hospital Week was also carnival week. The profits made from people having fun and enjoying themselves was ploughed into health care.

This extract from the minutes of the committee for the 25th July 1924 tells us just what was planned for the event that year. 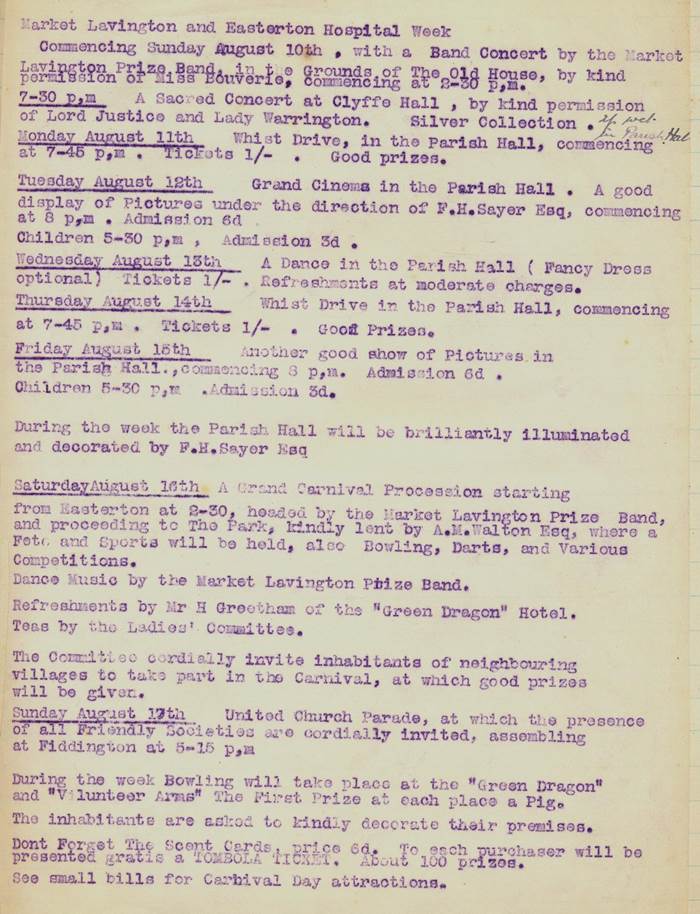 Plans for the 1925 Market Lavington and Easterton Hospital Week

Before looking at the content, let’s look at the method. This document has been spirit duplicated. The best known firm involved in the equipment was called Banda. You typed, or hand wrote onto a master sheet which had a piece of waxed paper behind it. When you made an impression on the master some of the wax was transferred to the back of that master sheet. By the time you had finished a wax version of your document was on the back of the master. This was then put on a roller and it was slightly damped with what amounted to meths. A piece of paper was fed into the roller and some of the damp wax transferred to it. You got a copy and that’s what we have here. The whole process, of course, has been killed off by laser printers.

Now to the content. Well, there was something for every day of the week starting with a band concert at The Old House and a sacred concert in the evening at Clyffe Hall. Week days, of course, were working days and so there were evening events – whist drives, film shows and a dance.

The big day was the Saturday which was carnival day. The population would be told just what was on by poster, but one can imagine excitement building as the week wore on and people made sure their carnival entry was ready. This really was the big event of the year and not to be missed.

The final event on the last Sunday was a united church parade. If more excitement was needed bowling for a pig took place through the week at The Green Dragon and the Volunteer Arms and there was a grand raffle – called a tombola.

The big event of the year was well photographed so you can expect lots to be seen at the Miscellany – which should whet your appetite for our famous museum food. As ever, the Miscellany is an event not to miss.