In 1987 our museum was young. No doubt, at the time, it seemed as vibrant and lively as we think it is today. But a look at a photo taken at that time makes it look quite an empty environment. Mind you, there are advantages to that. Less items on display means the things can be seen better. However, this photo also shows something of a cyclical nature. One item that was on display in 1987 has been stored away since then, but, as we saw on yesterday’s blog, it has re-emerged for 2013. It was clearly time for an airing. 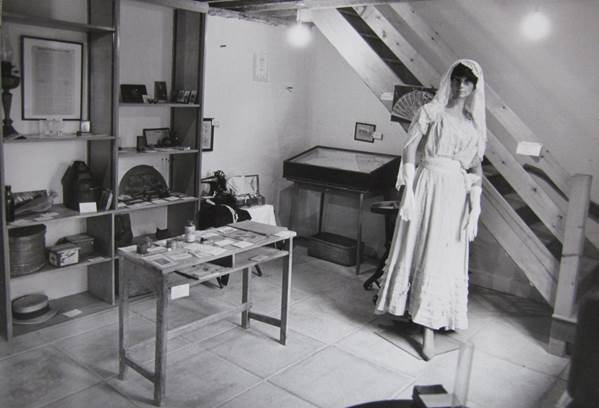 In Market Lavington Museum in 1987

Yes, back in 1987 the 1906 wedding dress and veil were on display. The mannequin it was on is the same one shown in yesterday’s blog – the one from Mrs McKinstry’s shop in Market Lavington. We see that the fan held by the bride is displayed behind her.

In the middle of the room is the school desk. This early 20th century desk was used at Market Lavington School and would have had drawers then. Back in 1987 it was displaying items used at the school. 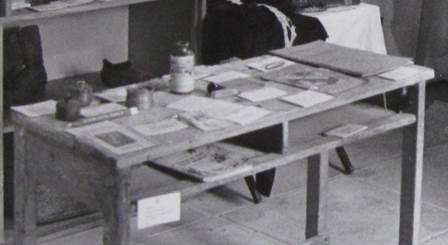 A Market Lavington School desk of the early twentieth century. It can still be seen at the museum.

Of course, we still have the desk but these days its use has become rather more functional. It houses all sorts of written and photographic items – folders about different aspects of Market Lavington and Easterton.

The display case we see in the background is now in the trades room. None of the shelving or cabinets we now have in the museum can be seen in this photo.

These days we have items on display on this side of the stairway, and the wall behind the stairway is covered in exhibits.

When we look at a photo like this one it is clear that the museum has developed hugely over the intervening period.

But that bride is back again to represent marriage in 1906.