The WVS was the Women’s Voluntary Service. It has taken wars, sadly, for men to realise that women were perfectly capable of doing most tasks that men do. Yes, there are differences and we only have to study sports records to see that men, on average, are just that bit faster and stronger. Most jobs don’t require these extremes. Driving certainly doesn’t.

During World War II, women were often left at home whilst their men folk served overseas or away from home. It was still believed that a woman’s place was in the home. But many women had time on their hands and wanted to do something for the war effort. They volunteered – some joining the WVS.

Today we are looking at an arm band worn by a WVS member who was a driver. 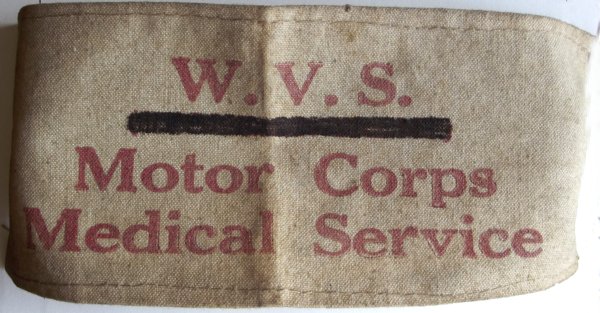 This WW II arm band from the W. V. S. is at Market Lavington Museum

The band is made of coarse linen and has an elastic strip (which has long since lost its elasticity) to hold the band on. It’s label is clear W. V. S.  Motor Corps  Medical Service. It gave clear indication that the wearer was a volunteer but engaged in work to help the war effort. We don’t have full information, but it sounds, very much, as though the wearer may have been an ambulance driver.

This item was given to the museum, some 20 years ago, by a Spin Hill Lady.