Hands up if you were an ink monitor at school. If you were, you are probably of a more senior age now. It had been your task to make sure that inkwells in desks had a sufficient quantity of this writing fluid.

If you are still a mere youngster then you probably have no idea what the previous paragraph was about.

Let’s take you back to the 1950s and 60s. Schoolboys and girls had to write with pens using a very liquid, watery fluid just called ink. They may well have started with a ‘dip-in pen’. These had a metal nib attached to a wooden handle. The cunning design of the nib meant that when you dipped it into ink, handily held in a little pot set in the desk and known as an ink well, it held some of the ink. You could then write with the pen, as you might with a pencil. The nib allowed ink to slowly flow as you moved it across paper. When the nib ran out of ink, you just dipped it in the ink again and carried on.

To allow the ink wells to be filled, ink manufacturers produced quite large bottles like this one.

Stephens Ink Bottle from about the 1960s

Stephens Ink Bottle from about the 1960s 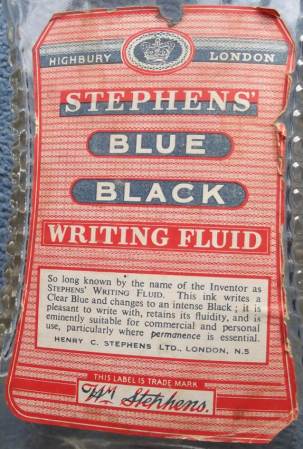 As you got used to writing with a dip-in pen, you felt a need to move on to a proper fountain pen. You had to acquire your own but in those days of 50 or 60 years ago, getting a fountain pen as a present was almost a ‘wow’ moment. It was one of those steps that marked the path to adulthood. Fountain pens had a small rubber bag inside the barrel of the pen. A lever could squeeze the air out of an empty pen. Then you dipped the nib in the ink and when you released the lever, ink was forced into the bag. Your pen was charged!

Your mum was now concerned that with larger quantities of ink you could make a permanent mess of your clothes. So along with your pen you needed a bottle of washable ink. These were much smaller than the classroom bottle – easy to keep in your school satchel.

Now to go back to 1900 when, actually, things were much the same as in the 1950s and 60s. There were classroom bottles of ink. The difference was that back then the bottles were earthenware rather than glass. 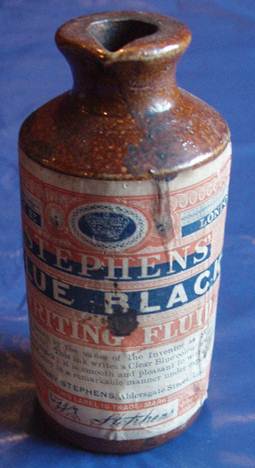 A bottle from about 1900 at Market Lavington Museum

Interesting to see that, except for size, the label stayed the same.

You can check out more about Stephens’ Ink on this BBC web page.