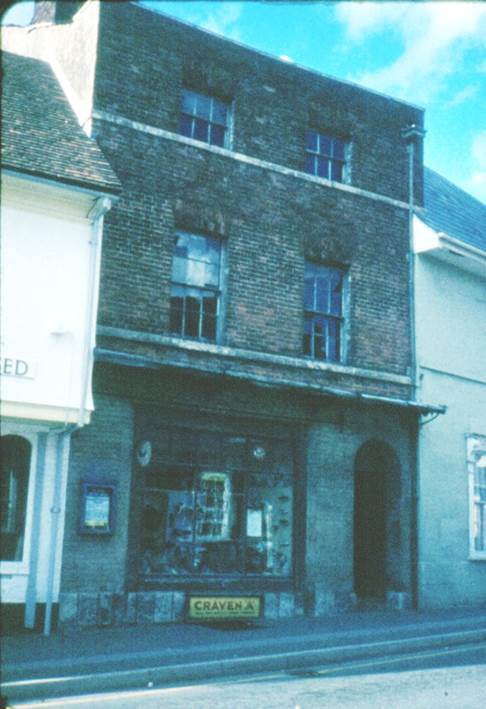 This isn’t the best photo you ever saw, but sometimes, we feel, a poor photo has a story to tell and is worth sharing. That’s so with this one.

The rather drab looking shop was Ken Mundy’s shoe shop and this picture dates from around 1977. But let’s just look at the left and remind ourselves that the ED visible was at the end of Lloyds Bank Limited – a reminder that not only did we have a shoe shop in Market Lavington, we had banks as well.

Let’s start at the bottom of Ken’s shop with the enamel advert for Craven A. Craven A was a tobacco product and we think it must have been on the shop in much earlier times. Ken never sold tobacco products. That particular enamel sign was quite common and carried the tag line (or should that be tag lie?) ‘will not affect your throat’.

Above that is the shop window. Ken sold shoes but he also soled shoes. Yes, he did shoe repairs. He even made shoes. Ted Maslen told us his wedding shoes were made by Ken. The window was a bit of a jumble, but the shop inside was absolute chaos. Ken was never very tidy or orderly and it was not unknown for people to arrive to collect a pair of shoes after some repairs and Ken could only find one. If you came back a couple of days later, he’d find the other as well. Nothing was ever permanently lost.

New shoes could be a problem as well. They could have been in the shop for a long time with one in the window and another in a shoe box. The one that had been in the light may well have faded and could be significantly different in colour from its partner.

But despite these little quirks, Ken was liked by villagers, and the young lads often gathered at his shop to learn something of his wit and wisdom.

We have a moderate amount of Mundy memorabilia in the museum and it really does remind us of a past time.

But one more thing on that photo. There’s clearly a noticeboard next to the shop window. We can’t remember what it was for, but it could be a proper bus timetable – so much better than the scrappy information you get these days, which tells you almost nothing. But there was a time when many shops had an information board for one organisation or another.

So, some good memories from that rather poor photo.