One of Market Lavington Museum’s 2013 displays is a time line of photos showing the history of the railway line through Market Lavington up to (almost) the present day. As a late build line, opening in 1900, we have good photos of construction in progress. For the most recent era we have the steam loco, Tornado (completed in the year 2010) passing through with a steam special.

But some superb photos of the station, just after closure in 1966, were recently given to the museum – and they arrived too late to be a part of the display.

This one shows the main buildings on the down or westbound platform as viewed from the up platform. 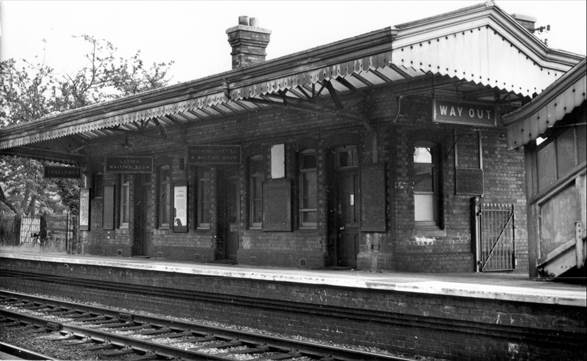 Lavington was blessed with a solid little station. It was actually in the parish of West Lavington in an area that gets called ‘Chocolate Poodle’. For a while, the former Railway Hotel traded under that unlikely name.  The station was sited where the line crosses the main Devizes to Salisbury Road and the old goods yard is now the yard of a scrap metal merchant.

We’d guess the station was built from local brick. The nearest brick works was actually in Cheverell. The bigger works in Market Lavington were not far away.

The station is equipped with all facilities (save a refreshment room). There is a booking office and general waiting room, a ladies waiting room and a gentleman’s toilet. The nearest door is marked ‘PRIVATE’ so must have been something the staff used.

It is all swept away now. Travellers racing through on the high speed trains would not recognise that there has ever been a station there.