Lord Warrington of Clyffe (previously Sir Thomas Rolls Warrington, a High Court Judge) took his retirement at his Market Lavington home of Clyffe Hall. He was a man of sharp intellect but as he aged his body began to let him down and in this recently given photo we see the noble Lord resting in a wheel chair. 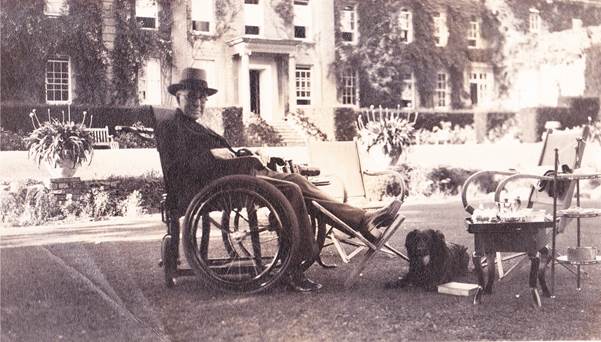 He’s sitting surrounded with the paraphernalia of afternoon tea. No doubt the dog hopes to share in this. He seems to have selected a shady spot on the lower lawn. Clyffe Hall itself seems to be bathed in sunshine. We guess this was in the 1930s. Thomas, Lord Warrington died in 1937 aged around 86.

A noticeable fact in the photo is that Thomas’s raised leg has a built up shoe. Was this an old age feature or had he always had legs of slightly different length?

We’d like to thank Ian in Australia for sending us these photos.