No matter where we are, we all love a reason to celebrate and the coronation of King George VI, on May 12th 1937, provided just such an occasion. Perhaps it was a really special time, for it enabled the country to get over the crisis created by the abdication of Edward VIII the previous year.

In Market Lavington, a group of people formed the Coronation Band, adopting a range of weird and wonderful costumes for the occasion. 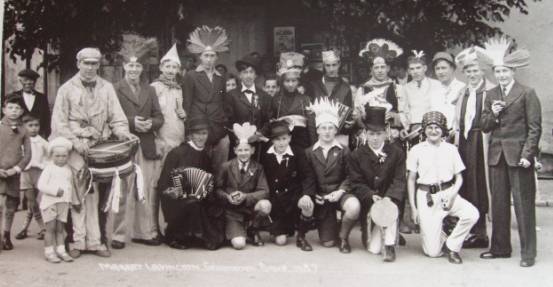 The Coronation Band of 1937 - a photo at Market Lavington Museum

This photo has been reasonably well recorded.

In the back row we have:-

In the front row:-

In the left corner:-

There’s a limit to picture size shown on a blog, but by zooming in we can see that faces are clearly visible and easy to recognise.

A close up on some band members

As ever, we’d love to know more about the people shown in this picture. If you can help then please contact the curator.