This photograph shows a collection of local women in what we believe are red, white and blue aprons. A couple of the aprons are definitely styled as union flags. Others are in quite a variety of designs. We do not know what the event was, but there would not seem to have been any royal event to warrant this show of patriotic colour, unless it was the birth of the King’s granddaughter, Elizabeth in 1926. But back then she was not expected to become queen. So maybe this event was the usual dressing up for the hospital carnival week. 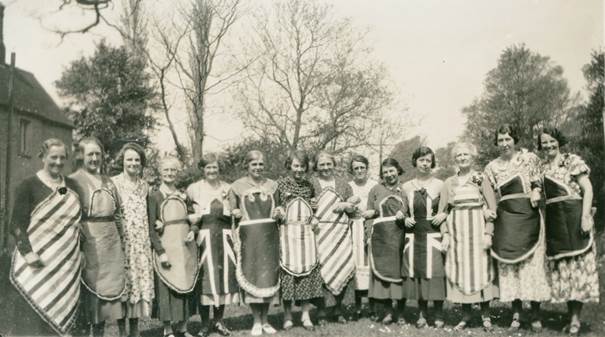 Colourful ladies – in black and white. Believed to be in the 1920s

We have the ladies named, from left to right as:

It’s a shame we don’t have first names and, in the spirit of the time, the two married ladies with initials have been given their husband’s initial. Even so, those initials allow a probable identification to be made.

Mrs E Potter was probably Mary Ann, born about 1881 as Mary Ann Pike. She married Edwin Potter in about 1904. Amongst their children at the Parsonage Lane home there was the future Mrs Elisha.

Miss N Hiscock was probably Nellie (Elenora) born about 1884 She had lived at Platencia on Church Street at one time.

We’d be delighted if anybody could tell us anything about the other ladies.