We couldn’t take every bit of personal memorabilia at our small museum, but some items belonged to a special enough person that we feel we’ll squeeze them in. This little book is a case in point. From the outside it might look a bit special with its pocket and handles. It looks rather like a small handbag.

If we look at the spine we see it is a Book of Common Prayer along with Hymns Ancient and Modern. 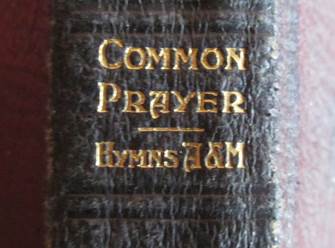 It’s a Book of Common Prayer

It is the name inside which adds real interest to this item. 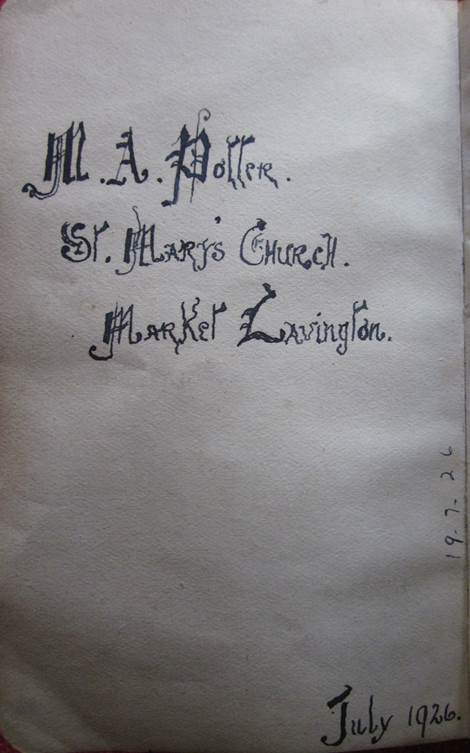 It belonged to M A Potter

This copy was the property of M A Potter who attended St. Mary’s Church, Market Lavington and is dated twice. The fancy hand has marked it July 1926. A more prosaic date just says 19-7-26.

But who was M A Potter? She was Mary Ann and she had been born around 1881 in Milton Lilbourne near Pewsey. In 1903 she married Edwin Potter, a Market Lavington man whose father operated a horse bus between Market Lavington and Devizes and also served as a carrier and had a small farm on which Edwin worked.

The Potters were blessed with a number of children. The first was Helena May born in 1904 at their home on Parsonage Lane. Helena May went on to become a teacher and in 1929 she married Bill Elisha. This made her Mrs Elisha the hugely long term infant teacher in the village.

So Mary Ann joined a well-known local family and then gave birth to perhaps the best known of them all. We are pleased to have this small memento of her life.