For many of us it seems almost incredible that 13 years have elapsed since the start of the new millennium. (OK – it’s less than 13 if you stick to the idea that the millennium started with the year 2001.)

Remember all those fears? The Y2K problem with computers was going to cause international mayhem. Computers would stop working and that would cause aeroplanes to fall out of the sky. Well they were some of the claims.

Away from the hype, villages set about marking the event in their own ways. A little Market Lavington event was to produce an album of photos of every building in the village, with occupiers standing outside. Sadly some areas couldn’t come up with a volunteer photographer, so not quite all of the village was covered – but most of it was.

In the museum we actually have not one, but three albums of these photos and all are well captioned.  It was a popular collection to look at when the cubs visited the museum. It’s ancient history to them, but history that might show their parents.

Some of the pictures showed shops and had the staff outside the door.  This one shows what we all call the Co-op but which appeared to be ‘Stop & Shop’ in the year 2000. 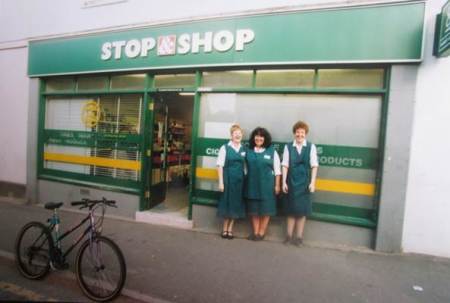 Market Lavington Co-op and staff in the year 2000

The staff of the day were Erica Williams, Lyn Davis and Roberta Edwards.

If your house in Market Lavington was built before 2000 there’s a good chance you’ll find a photo of it and the occupants.