Mr Burgess gets a delivery

As a photographer, Alf Burgess would have been in frequent need of supplies. He’d have needed, in particular, the chemicals for developing and fixing film and prints. This label tells us that he got supplies from Johnathan Fallowfield of London. 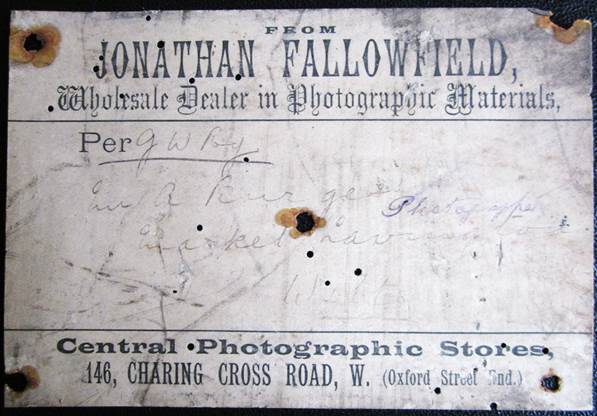 The label was found in 1981 in the cellar of 13 High Street which was the Burgess home and photographic studio and shop from the 1870s. It is addressed to Mr A Burgess, Market Lavington, Wilts and was carried by the Great Western Railway.

There’s a fine history of the Jonathan Fallowfield company on the web at http://historiccamera.com/cgi-bin/librarium/pm.cgi?action=display&login=jfallowfieldco . From this we know the company moved to the 146 Charing Cross Road address on this label in 1890. Alf died in 1918, so we have a date window for this label.

We had no museum in 1981, but Peggy Gye was the acknowledged village historian and so it was given to her.

It’s only a label, but it tells a tale.