This blog post stems for a bit of serendipity. Our curator’s son visited a steam rally in his local (to him) Buckinghamshire village and snapped this shot of one of the road locomotives there.

When Dad, our curator, saw the picture he blinked and commented, ‘Norman Box was born in Market Lavington’. Of course, our photographer had no idea that this was the case. It was just one of those lucky chances that made him take this engine. 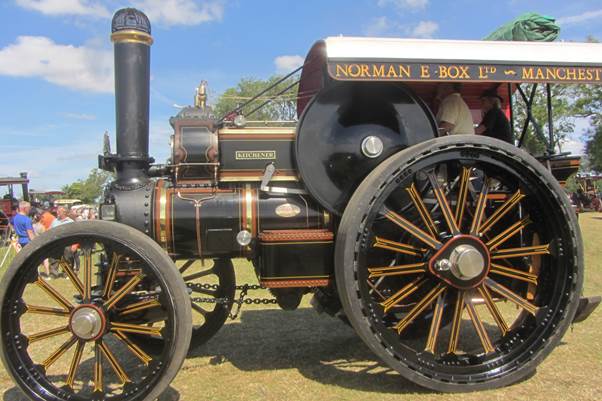 Former Norman Box traction engine photographed at a rally in 2015

The engine itself is a Fowler and dates from 1902. It probably had no connection with Lavington apart from its owner, and possibly its driver, coming from the area.

Norman Box was born in the first quarter of 1881 in Market Lavington. He was three months old at the time of the 1881 census at which time his father, Edward, was the brickyard manager. He and his wife Mary and 3 year old daughter Lilian lived in the Market Place. Edward was the son of William and Sarah. William owned the brickworks and lived at the brick master’s house by the works.

Edward’s passion, however, was traction engines. It was probably a young Edward who was responsible for the brickworks becoming very early users of this form of motive power – possibly the first traction engine users in Wiltshire. Edward’s brother William was equally enthusiastic and it was him who devised a transmission system to cause less damage to bricks in transit.

Edward moved up to the Liverpool area taking his young family with him. Norman would certainly still have been a schoolboy when they went north.

Edward worked as a traction engine driver, nominally working for his brother. Amongst other drivers was Sam Rumble, also from Lavington and a relative of the Box family.

We can find Edward Box and family in Kirkdale on the 1891 census. In 1901 Norman, still with his parents, is an engineer. The family were in the Bootle area.

Norman married Mary Fishwick in 1907 – still in the Liverpool area.

In 1911 Norman, Mary and a 1 month old baby Mary were living at Rusholme in South Manchester. Norman was a haulage contractor and an employer.

Almost inevitably data gets less from then on.

Sadly, Mary, his wife died in 1921. At some point Norman’s business was bought up by Pickfords.

Now that’s at least two and a half million in today’s money. Not bad for the lad from Market Lavington.