Our old, wooden parish room had its life terminated some twenty years ago – long enough ago to be fading into history. Its demise was met with sadness, but we think it was fair to say that it had had its day and our 21st century Community Hall is a more than fantastic replacement. The old hall had nowhere sensible to park cars, a stepped entrance, a teeny kitchen and was getting on a bit for it was almost 90 years old. And here we look back to the opening with a typed copy of a report. 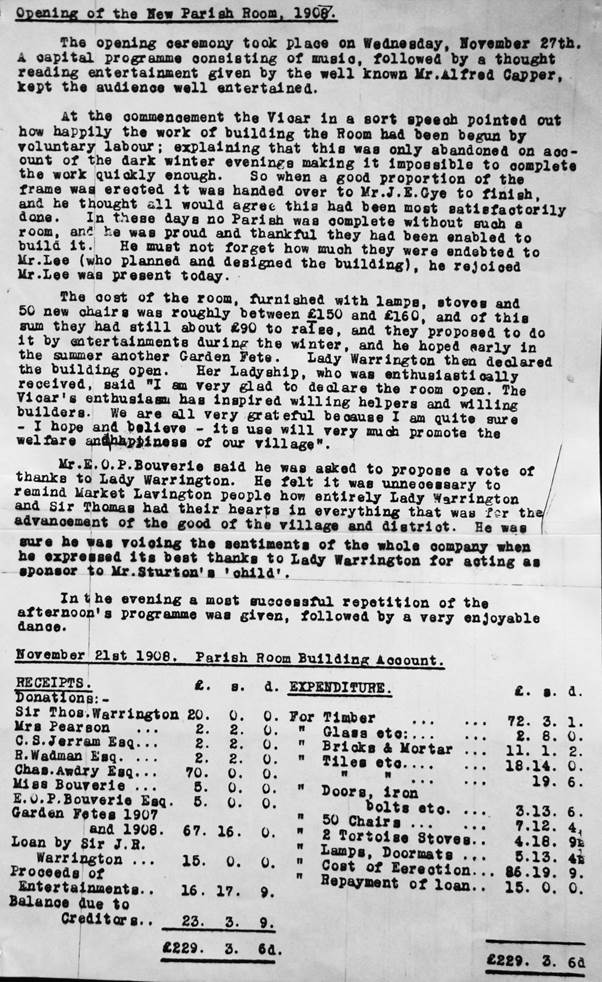 We learn that the room was officially opened on November 27th 1908 although somebody seems to have changed that to 1907 on this document. There was music and mind reading by Alfred Capper. We are told he was well known and indeed he is well enough remembered to have a web entry at http://geniimagazine.com/magicpedia/Alfred_Capper .

The Vicar (Reverend Sturton) made a short speech and the official opening was done by Lady Warrington. My Bouverie gave a vote of thanks.

A repeat performance, followed by a dance, was held in the evening.

The document ends with a statement of accounts – laughably cheap by today’s money standards.

Now I’d like to be able to say click on the picture to see a larger version but the service provider for this blog appears to have put a stop to that oh so useful facility. If you are using Windows then you should be able to hit CTRL and + to magnify the view. Other formats may allow magnification by use of finger and thumb.

Hopefully, you can read it.