There are many different views of army camps at Pond Hill in about 1909. These summer camps for territorial soldiers had been a part of life for some time. But by 1909 there was an awareness that the Pond Farm area was to become part of a permanent military range. The summer camps would be over. Local photographers recorded the scenes and sold them as cards, like this one. 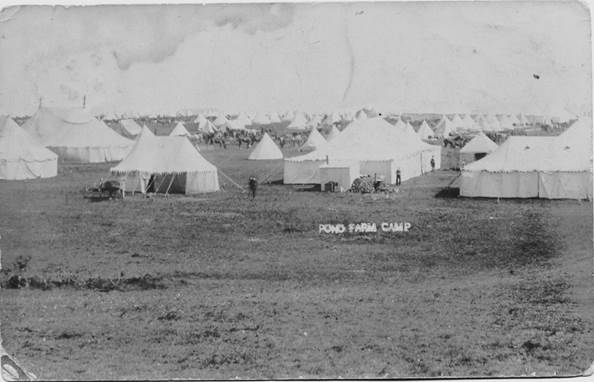 A 1909 photo of Pond Farm Camp in Easterton

This is certainly not the best card we have ever seen, but the message on the back paints a picture which certainly adds to the feel we can get for a Pond Farm Camp. 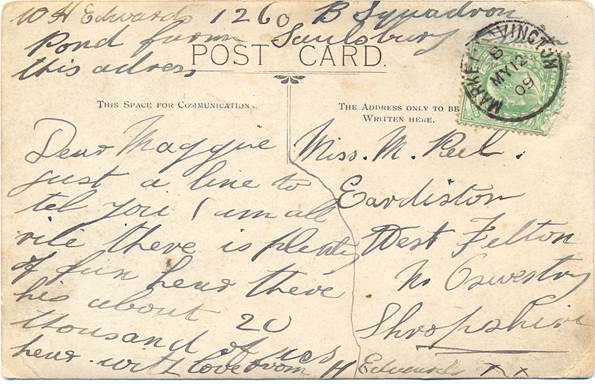 The message on the card

We can see this card was posted in Market Lavington on 12th May 1909. The writer (W H Edwards) was not the best speller but he conveys his meaning and the address to send to for replies. The message reads (retaining Mr Edward’s spelling):

Just a line to tel you I am all rite there is plenty of fun hear there his about 20 thousand of us hear. With love from H Edwards xx

So, there were twenty thousand men up on Salisbury Plain above Easterton and Market Lavington.  It sounds like they were enjoying themselves. No wonder they had an impact on the two parishes. And no wonder post card producers produced cards to sell to those twenty thousand temporary residents.